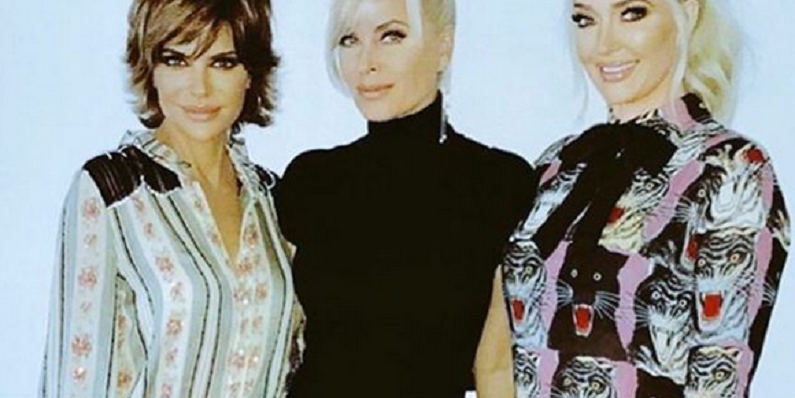 The Real Housewives of Beverly Hills star Lisa Rinna just called her and Erika Jayne the new “Thelma and Louise.” In the 1991 iconic American film, Geena Davis (Thelma) and Susan Sarandon (Louise) embark on a road trip that goes wrong. The friends end up running from the law after Thelma shoots a man dead.

RHOBH fans would love to see Rinna and Erika Jayne go on a road trip. Their friendship is stronger than ever, as seen on the show. It seems like Rinna is not as close to her friend of 20 years Denise Richards. The 56-year-old revealed she’s on team Erika Jayne after the show made its return this week.

Lisa Rinna and Erika Jayne are like “Thelma and Louise”

The Real Housewives of Beverly Hills returned from its month-long hiatus on Wednesday night, July 8. In the new episode, Erika Jayne defended herself against Denise Richards’s husband, Aaron Phypers. She accused him of “mansplaining” to her.

On Instagram, Lisa Rinna made it clear that she’s on Erika’s side. The pop star turned 49-years-old today and even posted a throwback photo in honor of her special day.

As per The Blast, Erika Jayne celebrated her birthday early. The Pretty Mess author shared a photo from her childhood that proves she’s always been an Ice Queen. Erika captioned the photo by writing, “Icy since ’71.” Then Lisa Rinna took to Instagram to celebrate Erika Jayne. She shared a series of photos documenting their friendship over the years.

She even included the photos from their dramatic girls’ trip to Europe and the Halloween party when Rinna dressed up as Erika Jayne. She captioned the photo by writing, “Happy Birthday Thelma, Love Louise.” Erika responded, “Thank you Louise!!!”

Lisa Rinna isn’t just on team Erika Jayne. She also made it clear that she’s a huge Sarah Paulson fan. This came after Andy Cohen invited the American Horror Story actress onto Watch What Happens Live With Andy Cohen on Thursday, July 9. During the episode, she shared her experience with Lisa Vanderpump, as per Us Weekly.

The 45-year-old actress said she had a terrible experience with the 59-year-old Vanderpump Rules star. Their run-in took place at the “Lie Detector Test” video for Vanity Fair in October 2019. Sarah recalled that time when Andy asked her if she misses watching Vanderpump on RHOBH.

Sarah said she was strapped to a lie detector test. She was afraid to say the wrong answer. Despite her bad experience, she doesn’t think Vanderpump is a “terrible” person.

“I simply said she wasn’t that nice to me. She wasn’t and that’s OK,” Sarah added. “It wasn’t a character assassination!”

While Vanderpump has yet to respond to Sarah’s remarks, Lisa Rinna showed her support for the actress. She took to Instagram to reveal that she’s a huge fan.

How Many Episodes Are In ‘When Calls The Heart’ Season 9?
Wait, Anna Duggar NOT Jim Bob Forced Josh On The Rebers?!
‘Y&R’ Spoilers: Sharon Blows Up Her Marriage – Gives In To Adam?
‘Love Island USA’: Will Cinco Dump Trina & Cashay For Leslie?
‘Below Deck Med’: Is Lexi Wilson Engaged? Malia White Spills The Tea