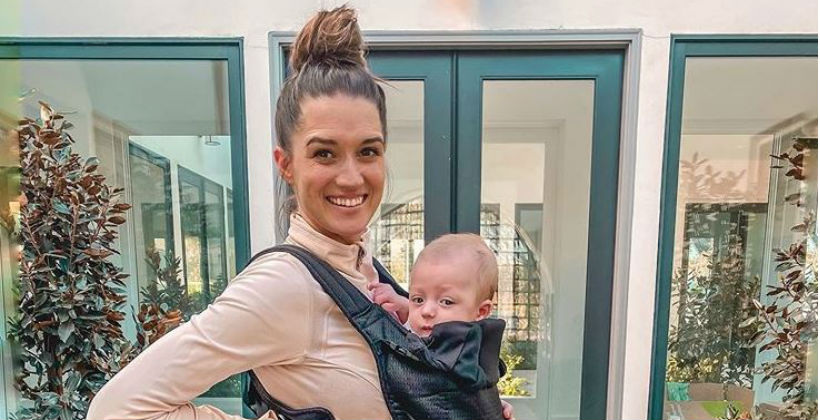 Bachelor in Paradise alum Jade Roper Tolbert is currently pregnant with her and Tanner’s third child. But, their growing family has suffered some loss. Jade is sharing details about suffering two miscarriages in the past. She hasn’t talked too much about it all because it’s painful. She was asked a question during a Q&A on her Instagram stories which made her open up.

People shared the details about what Jade had to say about losing two babies. In February 2019, Jade had finally opened up about suffering a miscarriage prior to becoming pregnant with Emmy. According to Jade, she became pregnant while she and Tanner were still filming Bachelor in Paradise. She discovered she was pregnant while visiting him in Kansas City.  Jade planned a  move to Kansas City with Tanner once they realized she was pregnant. She then lost their baby.

Jade said in 2019, “At the time, I didn’t really grieve because I just didn’t know really how to process it.” She continued, “It was so much so fast. In a really bad way, it was almost like this relief. It wasn’t really until after I had Emerson that I realized how much I love my child and how amazing of a miracle it is, and I think I really grieved that child much later.”

Jade and Tanner married in 2016 and welcomed Emerson Avery in August 2017.

This was our runner-up photo for our pregnancy announcement! 🤣🤣 Taking photos with two kids is like trying to herd cats, we took at least 500 pictures, but we truly got some hilarious ones. Haha. I wanted to say thank you so much to everyone for all the kind wishes and congratulations and for always being so wonderful as our family grows! We are so excited to be blessed with another child. I will be posting more updates very soon! Do you want bump progress photos? I feel I am already showing so much more this time around!! Also, I always say following your own motherly intuition is best way to parent, because we know our kids best, but I’m always open to learning as well. That being said, hit me with your best advice on raising (surviving lol) a family of little kids so close in age if you’re in the thick of it or have been through it! ❤️❤️

During the Instagram Q&A, Jade was asked if she had ever suffered a miscarriage. She shared  about the first baby she lost. Then also revealed a second loss. Jade shared she had a chemical miscarriage before becoming pregnant with their son, Brooks. She also shared a diagram explaining chemical miscarriages.

Jade replied, “I don’t talk about them publicly very much, probably because I still always cry even though a lot of time has passed, and it always catches me off guard that there’s still so much emotion under the surface.” She continued, “We lost a baby when we first got together and then I also had a chemical pregnancy the month before I became pregnant with Brooks.”

Brooks Easton was born in July 2019. He turns one later this month.

I love that my feed is mostly family time and baby smiles, but “us” time makes me smile too because it’s even that more special now. ❤️

Jade and Tanner announced baby number three was on the way in May. Since then, she has said this will probably be their last child. In saying that she shared she is soaking up every moment that she can being pregnant. And, while she is loving it, Jade had a rough first trimester. She’s halfway through her pregnancy, but they haven’t announced the baby’s gender yet.

Along with answering the miscarriage question, Jade also answered other questions relating to her pregnancies. She said she was craving salsa on everything at one point this time around. She also shared this pregnancy has been harder than her other two. However, she attributes some of that to having to care for Emmy and Brooks.

She also shared that the new baby’s due date is November 22. However, both Emmy and Brooks arrived early. She also said her first two births were unmedicated and she’s planning the same for this time around. While Brooks was born unexpectedly in their closet, she’s planning on making it to the birthing center for baby number three.

Hopefully Jade and Tanner will share the gender with fans soon. She should be nearing 21 weeks pregnant. Stay tuned for more details as they become available.