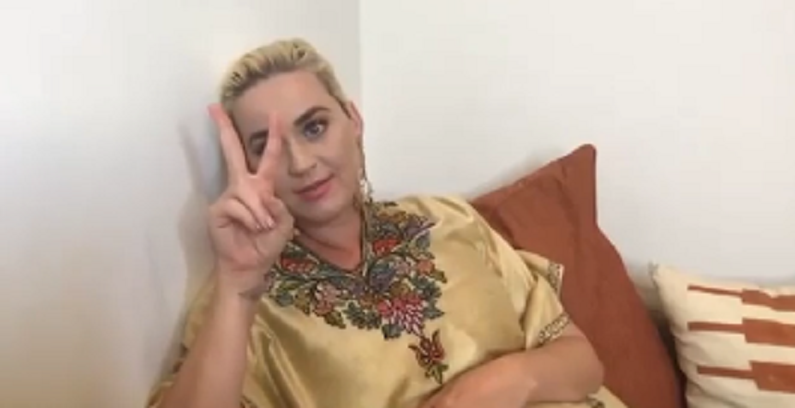 Katy Perry and Taylor Swift could be related. It makes sense. The former frenemies have more in common than they think. For one, Katy and Taylor both love animals. They also love British men. Taylor has been happily dating actor Joe Alwyn, while Katy is engaged to Orlando Bloom.

However, they set their similarities aside for a public feud. It all started with Taylor’s 2014 cover story in Rolling Stone when she talked about a female artist who stabbed her in the back. Katy fired back with the words, “Watch out for the Regina George in sheep’s clothing,” and the rest is history.

The ladies also feuded with diss tracks. Taylor had “Bad Blood,” while Katy had “Swish Swish.” Since then, Katy and Taylor made up with chocolate chip cookies and an olive branch. Ahead of the pop star’s fifth album, Katy addressed the rumors that she’s related to Taylor.

During her virtual chat on Capital Breakfast with Roman Kemp, Katy Perry talked about her new single and upcoming album. Host Sian Welby brought up the rumor that Katy and Taylor could be related, as per People.

“I read somewhere that your baby might have a very famous aunt,” Sian said. “Apparently, you and Taylor Swift are ninth cousins.”

“Well, we fight like cousins,” Katy joked. However, she admits that she wasn’t aware of the theory, which she dubbed as “fan-fic.” Co-host Roman Kemp said that someone has a “full thing” about the rumor on MyHeritage.com.

“Wow, I’m going to have to ask her if this is true or if we should, like, get blood tests together or something,” Katy responded.

Katy is used to putting tough situations behind her. The “Daisies” singer had a falling out with Taylor six years ago. The “Lover” singer told Rolling Stone that a friend “did something so horrible” and “tried to sabotage an entire tour.” The pair eventually mended their friendship in June 2019 when they dressed as a hamburger and fries in Taylor’s “You Need to Calm Down” music video.

The singer talks about her new single “Smile”

Katy Perry released her catchy new song “Smile,” which is also the title of her upcoming album. The song gives off good vibes over an upbeat melody. It’s a reminder to be grateful and stay positive even in tough times. It’s a song that’s needed during these tough times.

“I wrote the title track from the album when I was coming through one of the darkest periods of my life and had lost my smile,” Katy wrote in her Instagram post on Thursday, July 9. “This whole album is my journey towards the light – with stories of resilience, hope, and love.”

Step right up! Step right up! 🎪 KP5 is called 🙂 #SMILE 🙂 I wrote the title track from the album when I was coming through one of the darkest periods of my life and had lost my smile. This whole album is my journey towards the light – with stories of resilience, hope, and love. Listen to the song at midnight local time Friday, July 10 and pre-order the album at the link in bio. ♥️

During the interview, the singer also shared her decision to release the title track.

“What it is, it says in the lyrics kind of everything the album embodies,” Katy explained, as per Billboard. “Which is, like, hopefulness, resilience, joy, love, and that whole journey. And so that’s why it’s kind of the opus of the record.”

Smile is set for release on August 14 via Capitol Records.

What are your thoughts on Katy Perry being possibly related to Taylor Swift? Sound off below in the comments section.