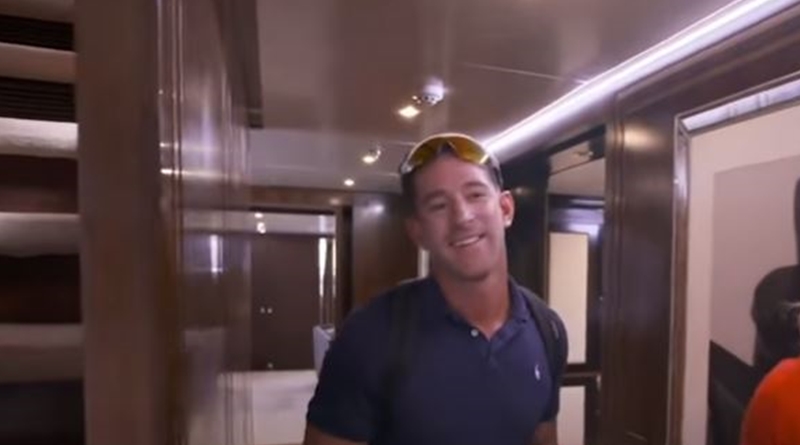 Below Deck Med fans heard in mid-June, that Peter Hunziker got fired for a racist tweet. Bravo couldn’t erase him from the show immediately. But, expect way less of him in the second part of the season. Presumably, that allows them time for edits. But, it seems they already start erasing him from memory, going by an Instagram post that Sandy Yawn posted.

Many critics of Peter didn’t mind at all that he got fired. We noted that he irritated so many people in this week’s episode.  Our article said, “The way he interacts with the women made viewers sick to their stomachs. They didn’t like it when he acted inappropriately with Christina “Bugsy” Drake.” Plus, he kept on staring at her and making inappropriate gestures. That came after she basically told him her lack of interest in him. So, for many, his firing came not a second too early.

Below Deck Med saw the back of Peter after he “posted a meme that showed a naked Black woman in chains,” Variety reported. Not hanging about, Bravo fired him straight away. But, as of July 7, fans still saw him on the show. Many people feel relieved he’s gone. But he still crops up on the episodes. However, it looks like Bravo has now erasing him from memory. In the spirit of the current cancel culture, it looks like the crew maybe got told to start getting rid of the fact he ever existed.

Sandy Yawn shares a photo with someone cropped out

On Thursday night, Sandy Yawn posted up a photo of some of the crew. It showed them with a dog. Sandy captioned it with, “No job is to tuff for the crew! Deck crew on puppy duty. We love 🐶 puppies.” In the comments, some fans chatted about the dog. The puppy couldn’t go on the yacht. Many fans loved the puppy in the show but hated the clients. One fan wrote, “I disliked those guests but that puppy was so cute 😍.”

But, other fans of Below Deck Med noted the cropped photo. The natural conclusion came that it cut off Peter. Lots of fans felt that Peter got the chop, literally, on the photo because of Bravo firing him. One fan said they cut him out for “comments on his Twitter in the past.” These inappropriate posts meant cutting him out. That came in answer to a fan who missed the news about the firing.

As one fan noted, the crew probably miss the puppy more than Peter Hunziker. While Bravo maybe sometimes edit people to look like villains, many critics just couldn’t stand him anyway. Plenty of critics don’t seem to mind if they simply, erase “Creepy Pete” as if he never existed.

Remember to check back with us often for more news about the cast of Below Beck Med.