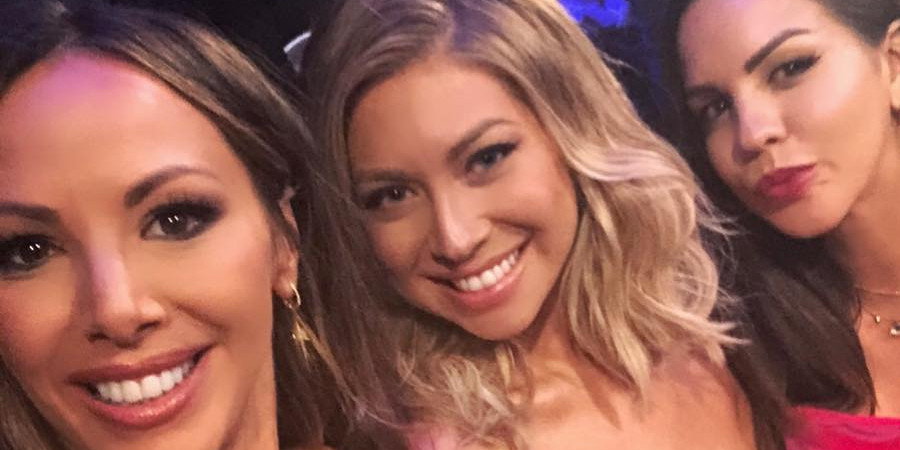 The ‘Witches of Weho’ are back together! The Vanderpump Rules coven were spotted together having lunch. Stassi Schroeder, Katie Maloney-Schwartz and Kristen Doute dined outdoors for lunch at The Grove in Los Angeles.

VPR’s Stassi, Kristen and Katie Lunch Together After Feud

Once BFFs, Stassi, Katie and Kristen’s friendship hit the skids during Season 8 of VPR. At the center of the feud was Kristen’s on/off relationship with Brian Carter. Katie and Stassi laid out their issues with Kristen on Bravo TV before the end of the season.

At the beginning of June, Bravo fired Stassi and Kristen for past racially insensitive behavior. The friends weren’t able to repair their friendship by the end of the Season 8 reunion. Fans were left wondering how the ladies would move forward.

However, after their abrupt firings, Stassi and Kristen have been in touch. The Instagram fan account _surrules shared a photo of the ‘Witches of WeHo’ enjoying lunch at The Grove. The photo is clearly recent, as part of Stassi’s baby bump is visible.

SPOTTED: The Witches of Weho reunion lunch at The Grove. #pumprules

The now-former VPR star announced her pregnancy a few days after Bravo’s mass firings. She is expecting a daughter with fiancé Beau Clark in early 2021. And Beau is ecstatic to be a ‘girl dad.’

Beau Clark Preps for Fatherhood With Collection of Dad-Manuals

After confirming the news of her pregnancy, Stassi set her Instagram to private. Beau, on the other hand, has yet to take his social media out of public view. The commercial casting employee is clearly excited about his upcoming bundle of joy.

Earlier this week, Beau posted a photo of a bunch of parenting books. It seems he cleared the bookstores right out. There are 12 books in his dad-manual haul, including the iconic, Go the F**k to Sleep.

Beau quipped in the caption, asking, “Did I get them all?”

Kristen responded with a “yes papa” with three clapping emojis. Unfortunately for the James Mae designer, she oddly chose to use light brown hands instead of the default yellow ones. Several fans asked her in the comments why she would use brown-colored hands. One even said that Kristen hasn’t learned anything from her Bravo firing.

The VPR alum may not have learned anything, but the situation clearly repaired her friendship with Stassi and Katie.

Katie has a lot to celebrate this week. July 7 marks the five-year anniversary of Tom Schwartz finally proposing to her. The proposal aired during Season 4 of VPR. Katie took to her Instagram to mark the occasion with a sweet throwback photo.

The couple will also mark “10 years since we fell in love” this summer, she writes in the caption.

The VPR stars finally wed on-screen during Season 5. However, during filming Season 8, they realized that it wasn’t legally binding because Schwartz lost the paperwork.

So, the couple had a second wedding in Vegas. Schwartz lost that paperwork, too, but it is legally binding. We think.

Speaking of VPR weddings, Lala Kent and Randall Emmett’s wedding should be coming up soon. Stassi and Beau were supposed to marry in October of 2020 but pushed their wedding back a year due to the coronavirus. They decided to try for a baby instead.

Check back with us for updates on the Vanderpump Rules weddings and a possible Season 9. Bravo has yet to confirm if the show will return for another season or not.