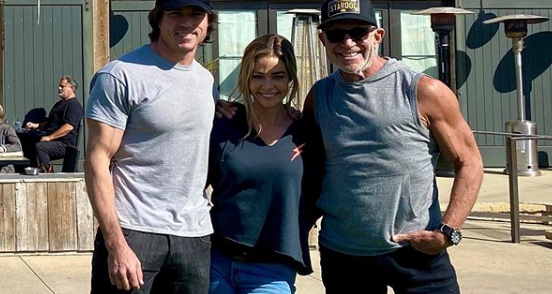 A look at RHOBH on the newest episode showed fans an angry Denise Richards and Aaron Phypers. The two left Kyle Richards’ BBQ quickly after having words with some of the housewives. Aaron has shown he is not afraid to get in the middle of things when his wife’s honor is on the line.

The women had been saying Denise was mom-shaming them. She’d recently became aware her daughters were hearing conversations she wasn’t comfortable with. She didn’t bring them to the BBQ and then Kyle overheard her telling Gabrielle why. Erika Jayne and Teddi Mellencamp thought she implied they weren’t being good mothers. They said she was being a hypocrite.

Denise got into more drama when Brandi Glanville stated they had an affair. She has denied it and reportedly sent a cease and desist order. While she hasn’t said much, she’s dropped subtle hints the issue isn’t just being dropped. The constant fighting and rumors made fans think Denise had quit filming for a while.

Richards and her husband left the BBQ and stated they would go for steak and strippers instead of drama. Later she said that was meant to be a joke. Denise Richards and her husband were involved in more drama when they attended another party. This time it was at Sutton Stracke’s house at a different party later on in the episode.

Erika told Aaron he, “let them have it,” at the BBQ. It seemed mostly the women were just accusing Denise of calling them bad parents. She told them her daughter had brought up the conversation where they were yelling about threesomes in front of her children.

Aaron Defended Himself Against The Housewives Attack

Aaron said he didn’t say they were bad people and she wasn’t interpreting it correctly. Erika went on to say he talked down to them according to US Weekly. She said, “you asked us if we’re OK with ourselves… if we could look in the mirror.” Aaron said, “are you?”

Erika snapped at him saying she was and Teddi came in to say he was belittling them.  Teddi had a problem with the tone he used and Erika said he mansplained to them at the BBQ.  Jayne stated in her confessional that he was trying to intimidate her and it would not work.

Denise Richards and Aaron left again, they just weren’t having the drama. As she left the party, Richards told Dorit Kemsley, “I don’t need friends that do this.” Real Housewives of Beverly Hills has come back from hiatus and the stars promise there will be more drama. Denise says before it’s over, everyone will know why they are fighting and it’s going to get even crazier. Most quarantined housewives lovers are ready for it.