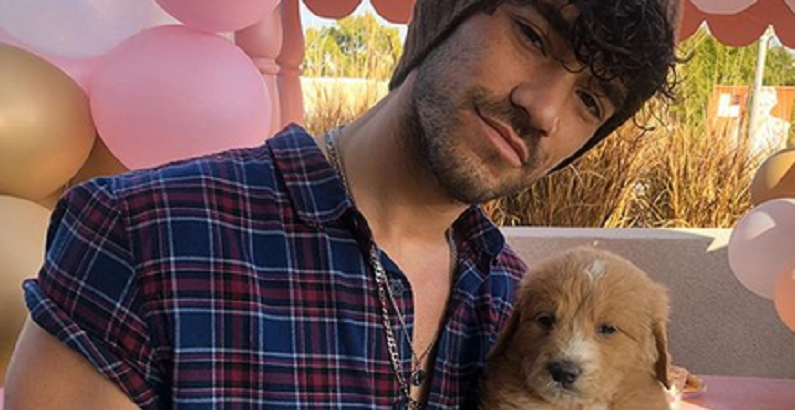 Brett Caprioni did it again. The former Vanderpump Rules star tried to charm his followers with cute puppies. This latest social media post comes after Bravo fired him. Brett broke his social media silence to share a photo of himself with his new furry friend.

Brett and puppies like sounds a great combination to some of his fans. His followers love looking at both. Some think Brett is pleasing on the eyes, and the puppies help improve his image. The 31-year-old decided to share new photos of him holding another adorable puppy. Brett appeared happy in the photo as he snuggled up to the fur baby. He even got flirty in the caption.

Brett Caprioni gets flirty with his charm and puppies

The fired Vanderpump Rules star shared a series of photos of him snuggling a puppy, as per Inquisitr. In the photos, Brett Caprioni wore a navy-blue tank top while holding a miniature chocolate Labrador. However, it’s not clear if the puppy is from Lisa Vanderpump’s California dog rescue. It’s also unclear if he’s volunteering his time there. Like Lisa, Brett has a passion for pups.

In the caption, the former Bravo personality asked his followers which they wanted to bring home to mom – him or the dog. Unsurprisingly, the majority of comments wanted Brett. Meanwhile, other fans wanted the puppy only. Some don’t care for Brett, especially after his past racist tweets resurfaced.

“Whichever one is potty trained,” another added.

Which one of us you bringing home to Mom? 😏

His fans made some humorous comments about the photo. Some of them asked if both were an option.

“BOTH, PACKAGE DEAL,” one fan responded.

However, most of the comments were positive. Fans wished Brett well on his next endeavor. There are also some VPR fans who will miss Brett’s presence on the show. Brett posted on Instagram for the first time since June 2, when he shared a black square in support of the Black Lives Matter movement.

Back in June, Bravo fired Brett Caprioni alongside fellow newcomer Max Boyens and OG cast members Stassi Schroeder and Kristen Doute. Fans slammed all four reality stars for their past racist comments and actions. Although all four of them apologized, the network decided to let them go.

The fired Vanderpump Rules star broke his silence. He thanked Lisa Vanderpump for her support before and after the scandal.

“She understood that I was a good guy who made a mistake,” Brett said in an exclusive interview with Entertainment Tonight. “And, she also believed in my capacity to learn from it and change.”

This pic sums up my season pretty well 😆seriously though this season has been an experience and a half for me. I mean I literally showed up to my first couple scenes not knowing anybody. It was a big change from carrying a vlog camera around but it was a change I welcomed. Change can sometimes be scary, but it works wonders for self-growth. I am not perfect by any stretch and if you know me you know I’ve never tried to be. I’m a big goof at heart who appreciates good energy and just wants to make people smile. Whether you want to believe that or not isn’t any of my business, but that’s always been me. Sometimes it works for me and sometimes it works against me. Hey, that’s life. You can’t please everybody. And if there’s anything you can take from this already too long and annoying caption, just embrace the imperfect in you more often. You have to. That’s the good stuff.

Brett reportedly tweeted the N-word several times. Some of his tweets included the hashtag “#womensuck.” The tweets resurfaced last year, before his VPR debut. On the Vanderpump Rules Season 8 reunion, Brett apologized for his past comments.

Would you choose Brett Caprioni or the puppy? Share your thoughts below in the comments section.

‘Return to Amish’ Star Rosanna Miller Pregnant With First Child!
Audrey Roloff Reveals Why She Kept Her Pregnancy A Secret
‘Y&R’ Spoilers: Sharon Blows Up Her Marriage – Gives In To Adam?
‘When Calls The Heart’ Season 9 Has Started Filming: All The Details
Audrey Roloff Tells All: Does She Want More Kids After Number Three?