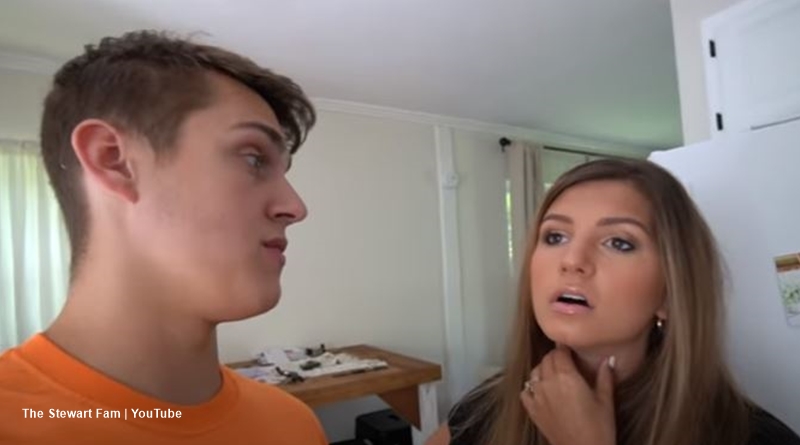 Carlin Bates and Evan Stewart got slammed by fans at the beginning of June for taking a vacation during the coronavirus epidemic. They probably stayed virus-free, given the timeline. But now, Evan spent time with someone who fell ill with the virus. The young couple stressed as they debated what action they should take.

Carlin Bates and Evan worry as he goes for Coronavirus testing

Evan and Carlin shared a video on YouTube about the dilemma they face. Evan said that someone who works with him tested positive for COVID-19. So, he needs testing and got sent home for two weeks. When he arrived home, he remained outside and called Carlin. She joined him outside. He already told her he needs testing, but they talked about what they should do. They discussed whether they should separate. Evan worries because he and Carlin spent time together all week.

If he got it and shows no symptoms yet, Carlin could also get it. He worries that if she moved out and stays with her family, she takes it with her. Meanwhile, Carlin stresses about their daughter Layla. E Online reported in May that her daughter suffers from heart and breathing issues. In their video, Carlin Bates referred to that. And, Layla still struggles. Naturally, that puts their daughter at high risk if she gets the virus. But, Evan pointed out that his test may come back negative.

Evan Stewart feels that if he tests positive they should stay home together. Apparently, Evan expects a fast turn-around for his test. If it comes back negative, then the issue goes away.  Evan feels fine right now. But Carlin lost her voice. She put it down to messing about at the lake. Anyway, Evan left for his test and felt nervous as he heard it hurts. He said his eyes watered, but overall, it’s survivable. But the bad news came: The hospital couldn’t do a rapid test, they waited at least two to three days for the results.

Carlin Bates was told that they need to quarantine together for a few days. The nurse told him they shouldn’t separate. Anyway, the call came after two days and Evan luckily tested negative for the coronavirus. Fans in the comments note that’s very good news. After all, the couple spent time with Joy Duggar on July 4. So, for now, Carlin Bates, Evan Stewart, and the baby seem safe. Relieved fans who tested positive seem very glad that the couple escaped so far.

One thing the video that Carlin Bates and Evan Stewart revealed, is that people in contact with positive COVID-19 patients should not wander off and stay with other people. Find out more about that sort of situation by checking out this link at the CDC.