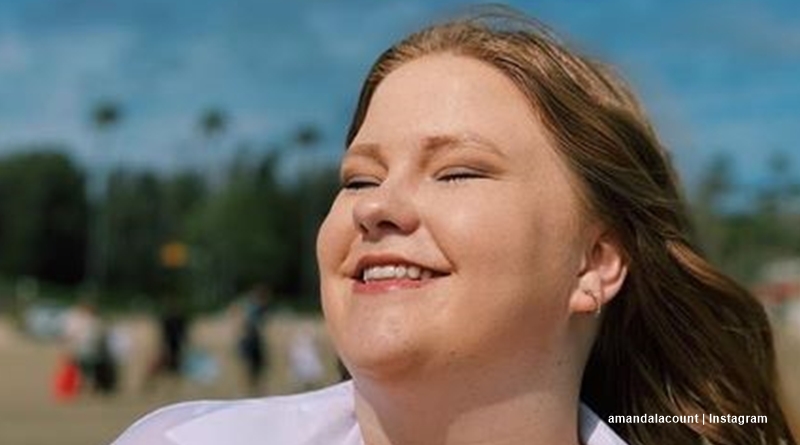 AGT fans who watch the 2020 season will recall Amanda LaCount. Appearing in the third episode, Heidi Klum buzzed her halfway through her performance. The young dancer carried on, despite the shock. Many fans slammed Heidi for it, as she knew Amanda struggled with body positivity her whole life. But, that’s not the first time she danced with the aim of breaking the stereotype when it comes to larger women.

During her audition, we reported that Amanda told Simon Cowell that people constantly “body-shamed” her. But, when she started dancing, clearly she won the hearts of the audience for her energy and enthusiasm. We noticed that Simon sat back smiling as he watched the plus-sized teen perform. Some of the audience cheered and got to their feet. But, Heidi Klum looked sour and slammed the buzzer midway. The audience booed Heidi. And, Fans complained that Heidi could have waited for the dance to finish rather than humiliating her.

Later, Simon and the other judges voted her through. And, it turns out now, that the America’s Got Talent dancer advocates for body positivity. In fact, she founded the #BreakingtheStereotype movement, according to People. She also appeared on “Rihanna’s Savage x Fenty fashion show.” On the AGT stage, she told Simon that her entire life she danced. But, people, always told her that given her plus size, she’d never make it. Despite that, she dances on, and her 200k+ followers on Instagram love her for it.

Amanda clearly learned all sorts of dancing styles during her childhood. One fan asked her on June 23 if she learned ballet. Amanda replied, saying, I trained in ballet from 2-17 years old. 💜.” Well, if you ever learned ballet at any stage, you probably know the dance form takes a huge amount of fitness and dedication. On her social media, the America’s Got Talent star posted loads of different energetic dances like breakdancing. She might look plus size but it’s very obvious a lot of her is well-toned muscle. She posts her videos and photos with the hashtag #breakingthestereotype.

The AGT star talked on one post about her determination. She told her fans, “It’s crazy to think about all of the things I have done in the last year, such as dancing at NYFW for Rihanna, being a PLUS SIZE Disney mermaid in Little Mermaid Live, being featured in an international American Eagle and Dove campaign, etc . . . I hope that me being myself and fighting for more acceptance and diversity in the entertainment industry is making a change.”

This video was made by @jordanmatter over 2 years ago and I have come so far since then. Being able to do what I truly love as my career is such a blessing and I don’t take anything for granted. It’s crazy to think about all of the things I have done in the last year, such as dancing at NYFW for Rihanna, being a PLUS SIZE Disney mermaid in Little Mermaid Live, being featured in an international American Eagle and Dove campaign, etc . . . I hope that me being myself and fighting for more acceptance and diversity in the entertainment industry is making a change. I love you guys and I wouldn’t have the career I do without you 🙂

Plenty of women live with plus-sized figures. In fact, the slim models mostly presented on fashion covers represent only a small portion of women in the world. Fans of Amanda love that she gives other people confidence. One fan said, “Yes girl!! KEEP SLAYING! I love and believe in everything about this message. You are inspiring and a d*mn QUEEN. 👑🔥🖤.”

What do you think about Heidi Klum of AGT buzzing Amanda Lacount who clearly looks very talented and fit? Are you happy to see that Amanda LaCount does something so inspiring with her life? Far too many people seem to be stigmatized for their body size, after all. Sound off in the comments below.

Update On Nicole Lewis From ‘My 600-lb Life,’ Where Is She Now?
Are Jax Taylor & Lisa Vanderpump On The Outs?
Chrishell Stause Goes On Instagram Rant After Split From Keo Motsepe
Rachael Kirkconnell Speaks Out Defending Rachel Lindsay Amid ‘Bachelor’ Hate
Olivia Busby, Fans Melt Over Sweet Bed Setup