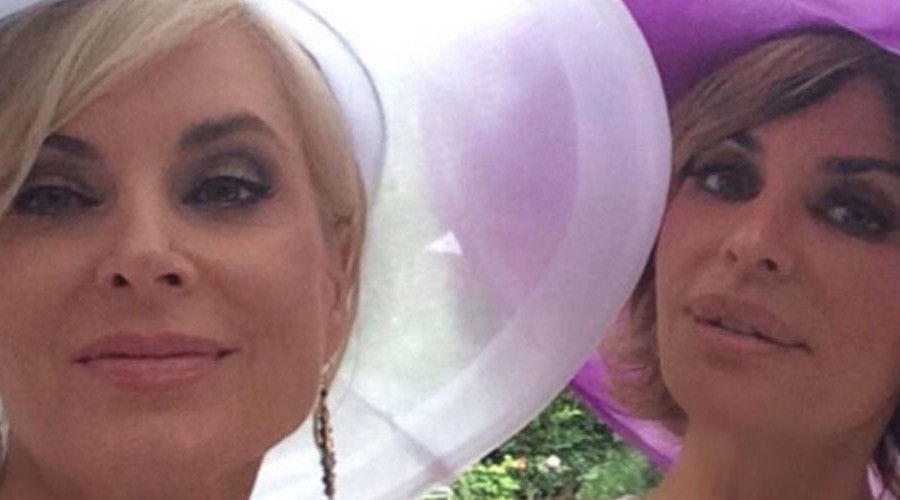 The Real Housewives of Beverly Hills isn’t even done with Season 10 yet. But Lisa Rinna is looking ahead to the reunion. She wants the opinion of her fans whether she should show up sober or as ‘drunk Rinna.’ Lisa jokingly asked her followers to vote on the topic on her Instagram Stories on Tuesday, July 7.

If you’re a fan of RHOBH, you’re familiar with ‘drunk Rinna.” When the Days of Our Lives star has too many drinks, her table-dancing alter ego comes out. Another version of ‘drunk Rinna’ throws wine glasses at co-stars when they threaten to expose a secret about her husband, as Kim Richards found out during Season 5.

But fun ‘drunk Rinna’ took over at Bravo host Andy Cohen’s baby shower last year. Lisa reposted a clip of the table-top dance on social media two months ago. She tagged Andy, saying the video was meant to cheer him up while he was fighting coronavirus.

Since our @bravoandy is recovering I thought it might be fun to re-live this Baby Shower Moment with Drunk Rinna. Sending you Love Andy!!!! #tbt 🍸💗😂

Seemingly out of the blue, Lisa asked her fans via Instagram Stories if “Drunk Rinna should come to the reunion.” The Inquisitr reports that on a follow-up IG Stories, Lisa wrote that she has “had it.”

What set Lisa off is unknown.

The outlet also reports that Lisa joked about ‘sober Rinna’ and ‘drunk Rinna’ both showing up. She wrote, “The first half I could be sober Rinna then bring out drunk Rinna for the second half?”

Bravo has yet to announce any plans for the reunion. It could be virtual, like the Vanderpump Rules reunion. It will depend on the coronavirus pandemic.

The last we saw Lisa Rinna on RHOBH, she was chasing after Denise Richards. Denise high-tailed it out of Kyle Richards’ party after arguing with her co-stars. Lisa runs after her, but Denise is already in the car.

A former star of RuPaul’s Drag Race, Jackie Cox, sometimes parodies Lisa Rinna on social media. Ahead of the continuation of RHOBH, Lisa posted a hilarious video of the drag queen parodying her chasing Denise. Complete with the same exact green dress Lisa is wearing.

See the video below.

RHOBH Returns For Explosive Second Half of Season 10

The parody video isn’t the only way Lisa is promoting the return of RHOBH. She also shared a sneak peek look at the new episode airing July 8. In the episode, Lisa and some of her co-stars decide to use the pole holding up the tent they are in for pole-dancing.

Check out the preview and tune in to Bravo on Wednesday, July 8, for a new episode of The Real Housewives of Beverly Hills.

Clearly we are no @jlo on that pole. 😂 #RHOBH Is BACK! All new episode Wednesday 9pm @bravo 💎