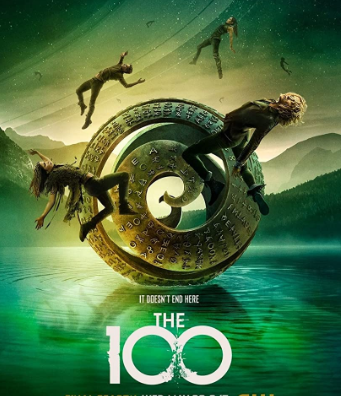 Whew, this episode packed in a lot of information, answered a few questions, and in its final season. The 100 has laid the groundwork for a potentially epic spin-off series. TV Shows Ace will unpack most of it for you. But fans be warned; there will be some spoilers.

Clarke and crew arrived on Bardo last episode and discover Bellamy is dead. Clarke is reeling from the news but trying to take control of the situation and find her remaining friends. At this time the “Shepherd”, Bill Cadogan, introduces himself. Clarke recognizes Cadogan from learning about the bunker that provided salvation for the grounders in the finale of Season 4. Cadogan was a fanatical cult leader as Clarke explains this to her companions in the grounder language Trigedasleng. But to Clarke and the other’s shock Cadogan can understand the language. Cadogan tells Clarke he knows about the Flame and asks if Callie is in the flame.

The episode introduces a new heroine, Calliope “Callie” Cadogan. Callie is a smart, outspoken idealist. She is also a member of the activist group, Trikru (Getting any hints?). Callie lives with her mother because she isn’t buying what her father is selling. The episode “Anaconda” starts with the missile deployment 97 years before the 100 returned to Earth, and Anaconda is the code word that means the missiles are in the air. Callie and her mother make it to the bunker as the Second Dawn members close the bunker against the nuclear fallout. She stands apart from the crowd and whispers, “Yu gonplei ste odon.”  Or as fans of The 100 will recognize, “Your fight is over”, the grounder’s traditional words for a final farewell to their fallen. Callie created Trigedasleng, and the pieces are coming together!

Callie confronts her father about his choice to let the world die, and we get to see Cadogan working with another anomaly stone. However, he is failing to discover how to use the stone. Further tension is revealed in the Cadogan family. Callie and her brother Reese, who is a dedicated disciple of their father, square off on several occasions.

As our new group navigates their lives in the bunker for two years the cracks are starting to show in the people and leaders. Then Becca Franco, portrayed once again by the amazing Erica Cerra, returns to Earth. And with her arrival, the circle of history is almost complete. Callie immediately begins to fangirl over Becca, and she is excited to discover that Becca has a serum to allow humans to once again live above ground. However, Cadogan refuses to let anyone in the bunker be immunized to the radiation.

But Cadogan is desperate to find an answer to the riddle of the anomaly stone and guess what, because of the Flame Becca has the key to unlock the stone. Becca is able to open a portal with the anomaly stone in front of Cadogan, solidifying his belief that he is the Savior of mankind. But during her work on the stone Becca opens a portal to what we can only assume is the future and returns talking about the end of humanity. When Becca refuses to help Cadogan because of what she has seen. Cadogan has her burned at the stake, so he can obtain the Flame and use it for himself.

But Callie is not about to let her father get control of the Flame. Callie and several hundred young members of the Second Dawn become night bloods and escape the bunker with the Flame. The new night bloods escape to the surface and begin looking for survivors they can now save with the 2000 anti-radiation serums they now possess. Cadogan leaves with the rest of the Second Dawn through the portal Becca opened before. But he leaves Reese on Earth to find Callie and return the Flame to him by any means necessary.

Back to the Present

When the story flashes back to the present Clarke answers Cadogan’s question, “Yes, Callie is here.” We can only assume Callie became the second Heda. Because Clarke had the Flame implanted in her head during Season 3; she knows this. Cadogan wants Clarke because with the Flame; Clarke is “the key” to unlocking the anomaly stone. But the bad news is Clarke no longer has the flame, which thankfully the Second Dawn does not know. Furthermore, the flame was destroyed. So how are they going to answer the riddle Becca left about the coming Armageddon? But of course, The 100 has to leave us with a few questions.

This episode gave us answers to questions that have lingered through multiple seasons. But there are still questions to be answered. I hope the remaining episodes will allow The 100 to reach a satisfying conclusion. The fans deserve no less. But this episode allows for so many new stories to unfold in the spin-off series. What will happen to Callie and her band of rebels? What happened to the Second Dawn after they left Earth? Will we see the growth of the grounder nation? How did the group of escapees split into the thirteen clans we know from The 100 series?

Rothenberg gave fans an idea of what he would like to do, “I have a plan to get back to space.” Rothenberg also said, “Callie and Reese’s sibling rivalry would be a driving force on the series, but while the two are currently at odds, ‘I doubt that it will stay that way forever,’” Rothenberg says. “If we are lucky enough to tell that story long-term, it will also have its peaks and valleys. It’s an important relationship.” But this will not be a re-hash of the Blake sibling relationship. Instead, Rothenberg said it will be more a “Cain and Abel story.”

The possibilities are endless with this show. I am excited to see what this new series might bring if it is picked up.

’90 Day Fiance’ Loren Brovarnik Gives EXCITING Pregnancy Update
Todd Chrisley Reaching Out To His Hurt Child, Which One?
Todd Chrisley Debunks Lindsie Bombshell: Wait, She Was Involved?!
Would Michael Allio Accept An Offer To Be ‘The Bachelor’ Next Season?
Downward Spiral?! TLC Fans Worry Tammy Slaton Might Be Suicidal