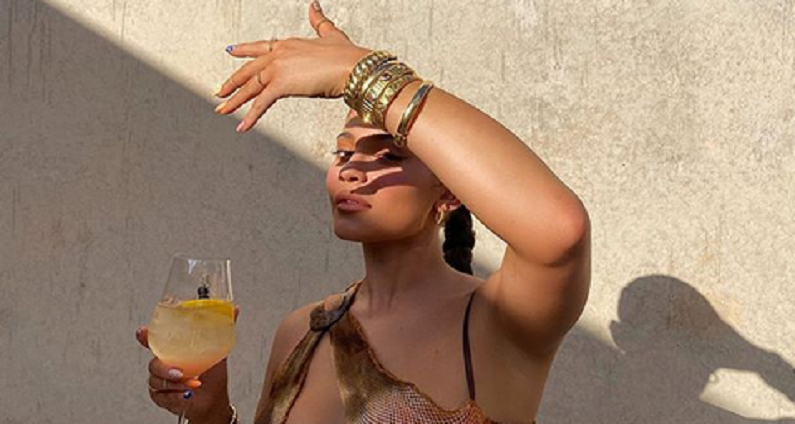 Kylie Jenner may have lost her beauty business and billionaire status. But that doesn’t mean she doesn’t set trends. The Keeping Up With the Kardashians star traveled to a remote desert location over the weekend. As TV Shows Ace previously reported, Kylie shared several photos of herself in “paradise.”

She teased fans that she would “be back” soon from her vacation. It’s unclear why Kylie had to go on the getaway. So far, her trip included Instagram shots in front of picturesque backdrops. In one of the photos, Kylie wore a curve-hugging orange dress that sold out immediately. However, there is one problem. She failed to tag the designer of the dress.

Kylie Jenner gets dragged for not tagging the designer

On Tuesday, July 7, fans took to Twitter to slam Kylie Jenner for not tagging the designer of her popular dress. LoudBrand Studios is a Black-owned business from the U.K. that’s responsible for the design. But some fans didn’t like that Kylie didn’t mention the brand in her Instagram posts. She posted not just one, but a series of Instagram of her in the same dress. She posted them to her Instagram Stories and Instagram feed.

“Kylie Jenner is refusing to tag the designer of the dress she just posted, which is a black owned brand, and now limiting her comments,” one follower wrote. “@LoudBrndStudios is the designer!”

“Y’all need to stop acting like Kylie Jenner is pro black,” another user wrote. “She’s actually quite the opposite.”

But Kylie fought back. She didn’t like seeing her name trend for all the wrong reasons on Tuesday evening. She took to Twitter to deny the accusations.

ok this is just a reach. why would i ever REFUSE to tag a brand and block comments. this is completely false. i think this brand is amazing and i wanted to show support and will continue to do so. everyone go check out @LoudBrndStudios https://t.co/r7oWRMNwoK

“ok this is just a reach. why would i ever REFUSE to tag a brand and block comments,” she tweeted. “this is completely false. i think this brand is amazing and i wanted to show support and will continue to do so. everyone go check out @LoudBrndStudios.”

Now, followers are entertained by Kylie’s tweet. Some of them thanked “Black Twitter” for “bullying” the reality star into supporting Black-owned businesses.

y’all bullied kylie jenner into tagging that woman and i love to see it pic.twitter.com/DO9Z9e9dJN

On Monday, July 6, Kylie Jenner shared several photos of herself from her remote hideaway. Most of the pictures featured her wearing that orange bodycon dress, as per InStyle. Though Kylie didn’t tag the designer of the dress, fans quickly recognized the designer.

Shortly after Kylie posted the photos, the limited-edition dress sold out. This led to countless fans supporting the Black-owned business. LoudBrand was very happy about the shout out. The brand took to Twitter to thank both Kylie and her stylist Jill Jacobs for bringing their brand to everyone’s attention. They also thanked the customers who purchased their clothes.

i love it here.

In addition, some people were glad that Kylie to promote the business. Even though her dress is currently sold out, LoudBrand announced they will do a “small restock soon,” with more details on their Instagram account.