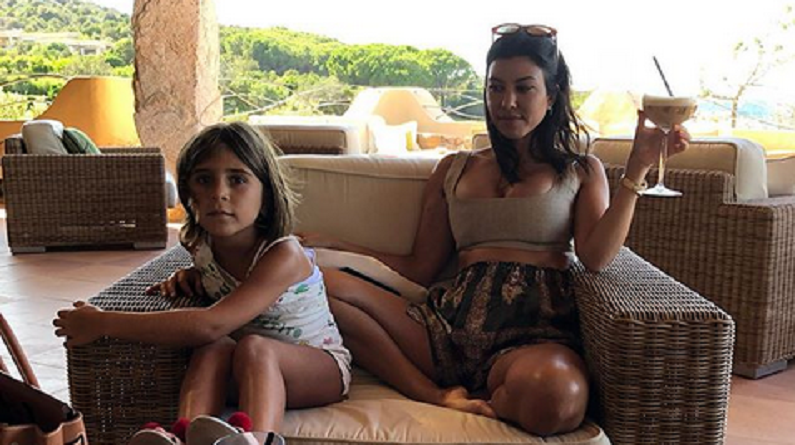 Kourtney Kardashian has a mindful approach to parenting. In an exclusive interview for Vogue Arabia’s July/August 2020 issue, she talked about being “present” for her kids. She makes sure that she’s not on her phone when she’s around them. This allows her to spend more time with them.

Aside from starring on Keeping Up With the Kardashians, Kourtney also runs her Poosh lifestyle website. She’s also busy being a mother of three to her kids: Reign, 5, and Mason, 10, and daughter Penelope, 8. Although she leads a busy life, she always puts her kids first. Kourtney explains why mindfulness and presence are important.

Kourtney Kardashian wants to be “present” for her children

In her cover story for Vogue Arabia’s July/August issue, the reality star revealed how “it’s so important” for her to be there for her children. It’s not just physically, but it’s mentally as well. Kourtney Kardashian either shuts off her phone or keeps it out of the room when she’s with her three kids. That time is for family only.

“I always try my absolute best when I’m with my kids not to be on my phone, to be present in what we’re doing, and have those moments where you’re looking in each other’s eyes and connecting,” Kourtney explained, as per People.

It is an honor @voguearabia to be on your July/August cover! This issue is dedicated to the power of following your instincts and what makes you happy, which is why I wrote the cover lines myself, the power of reclaiming yourself. Editor-in-Chief: @mrarnaut Photography: @arvedphoto Style: @grahamcruz.studio Makeup: @miyakemakeup Hair: @andrewfitzsimons Digital Art: @suzanne_tak Words: @alexandravenison

She’s so serious about being anti-technology that she keeps her phone out of her room at night. Before Kourtney goes to bed, she leaves her phone in her bathroom. She also doesn’t let her kids have their own cellphones. But they do have their own computers and iPads. She sets “time limits” for how long they can use them.

Of course, being a single mom isn’t easy. Kourtney Kardashian says she loves to relax with her kids one day during the weekend. She ends up sleeping in and lounges around in her “pajamas or sweats.” She also makes “no plans” that day. Kourtney uses that time to focus on her children.

Kourtney restated the importance of spending time with her family. She took her kids to a family getaway to Wyoming, which gave them all a break from technology. Kourtney also wants to “set boundaries” with her children when it comes to social media. As KUWTK fans know, Mason Disick opened his own Instagram and TikTok accounts without his mom’s knowledge.

picnic in the pickup

The older Kardashian sister also talks about the importance of therapy. She schedules “a double session” each week.

“For years I didn’t have that, where I could say no and set boundaries,” Kourtney explained, as per Us Weekly.

In her Vogue Arabia cover story, she explained why she launched Poosh. She wanted to encourage the importance of “living” and “doing your best.” The beauty lover also wants to change the cosmetics industry. Kourtney feels that a lot of work needs to be done.

Reality star encourages her kids to use their imagination

Their playtime is when Kourtney Kardashian encourages her children to use their imaginations. In a previous interview for Architectural Digest, she gave fans a glimpse into her “modern, sophisticated, and really warm playhouse” that Scott Disick built himself. The playroom includes a bottom floor and small loft area, which is accessible via a wooden ladder. Kourtney said that it’s also a “technology-free zone.”

Happy Father’s Day, thankful for you and these three special ones.

Her children play with their crocheted tea sets, musical instruments, toy cars, and stuffed animals. They also occupy themselves with classic stories like The Chronicles of Narnia, The Complete Sherlock Holmes, The Little Prince, and Madeline. She keeps all computers, iPads, phones, TVs, and video games out of this room.

“That’s why we have a lot of books, and it’s great for playing games and really just being imaginative,” Kourtney explained.

Kourtney Kardashian and Scott Disick have co-parented their kids since their split.