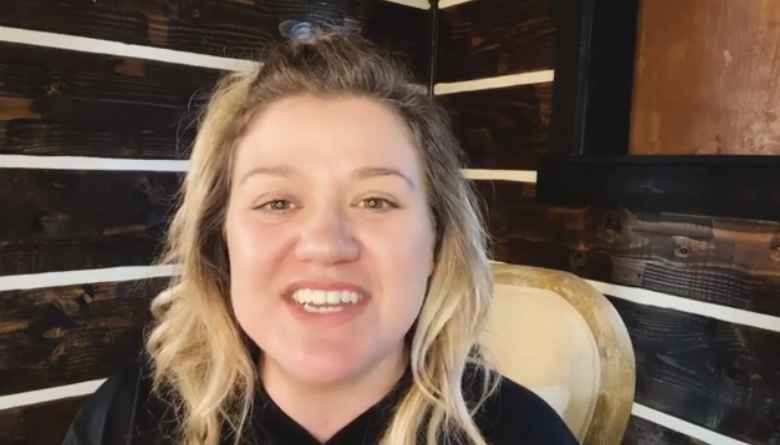 In the current climate, racists seem to be coming out of the woodwork everywhere. It seems they are no longer shy about abusing people. The Voice coach, Kelly Clarkson recently retweeted a video taken in a restaurant. It shows a man shouting racist abuse at an Asian family dining in the restaurant. Moreover, she accompanies the retweet with an impassioned message to her followers, telling them to “keep calling hate out.”

Kelly Clarkson spotted the racist video on Twitter and was horrified by its content. As the videos shows, the incident went down in a restaurant. The video captures a man shouting racist abuse at an Asian family dining there. A waitress immediately called on the man to leave the restaurant. In her tweet, Kelly thanked her for speaking up.

THANK YOU SO MUCH to this woman for speaking up and throwing this trash out! Y’all keep standing up for people and for what is right! We all bleed red! Keep calling hate out! It’s unacceptable, ignorant, and disgusting! Change won’t happen if we’re sittin’ down so keep standing! https://t.co/ZplFma22cU

Clarkson retweeted the video on July 6. In her accompanying message, the mother of two thanks the woman so much for speaking up and “throwing this trash out!” Kelly tells everyone to keep “standing up for people and for what is right.” Moreover, she continues by writing, “We all bleed red! Keep calling hate out! It’s unacceptable, ignorant and disgusting.” Clarkson adds that change won’t happen if everyone is sitting down, so everyone must keep standing.

As noted by the Inquisitr, the original post was made by Twitter user @JohnRizkallah. He is a friend of the person who originally shared the video on social media. While his post went viral, Kelly’s retweet has more than 775,600 views. What’s more, her tweet has over 5,400 likes. It’s been retweeted more than 960 times in 24 hours.

As noted by Newsweek, the video was initially posted on Instagram over the past weekend. The Instagram user was Jordan Chan and she was sharing her own experience. Reportedly, the incident happened to her and her family while dining in a restaurant on July 4. Jordan’s video soon went viral. In their report, Newsweek names the man as Michael Lofthouse.

❗️❗️❗️SHARE THIS POST❗️❗️❗️ Trigger warning: Racism, Vulgar Language (FYI he had a LOT more to say after I stopped recording) This is the face of the man who relentlessly harassed my family and I completely UNPROVOKED, UNWARRANTED, and UNCONSCIONABLE. We were celebrating my tita’s birthday, literally just singing happy birthday to her and taking pictures, when this white supremacist starts yelling disgusting racist remarks at us. (“Fuck you Asians” “Go back to whatever fucking Asian country you’re from” “You don’t belong here”) It is no coincidence that this man has the audacity to showcase such blatant racism on the 4th of July. White supremacy has a notorious habit of masquerading as patriotism! The fact that Donald Trump is our president (i.e. THE MOST POWERFUL MAN IN THE WORLD) gives racists a platform and amplifies voices of hate. The surfacing of racists is so prevalent right now, even in such an ethnically/culturally diverse and liberal state like California, because Trump HIMSELF uses his position to incite racial tension and to promote aggression towards POC, foreigners, and immigrants. We need change! PLEASE PLEASE PLEASE VOTE THIS UPCOMING RE-ELECTION. PROTECT ALL PEOPLE REGARDLESS OF SKIN COLOR AND ETHNIC ORIGIN. ✊🏻✊🏼✊🏽✊🏾✊🏿

In her caption, Chan wrote that Lofthouse had “relentlessly harassed” her and her family. This was while they were dining out in California, celebrating her aunt’s birthday. Moreover, they were singing happy birthday to her aunt as the incident began. In her caption, she starts by writing “Trigger warning: Racism, Vulgar Language.” However, she writes that the man had a lot more to say after she stopped recording.

Jordan says the incident was completely “unprovoked, unwarranted and unconscionable.” She went on to say that the political situation in America has led to racists becoming bolder. This is why they now attack innocent people in this way.

In the video, the waitress can be heard confronting the man and telling him to leave the restaurant. She adds that he is now banned from entering there. As the man hurls the racist abuse, the waitress firmly stands up for the Asian family. This is why Kelly praised the employee while sharing the message.

This isn’t the first time Kelly has fought back at racism. She recently honored those taking part in the Black Lives Matter protests. She sang a special Kellyoke cover of the popular U2 song I Still Haven’t Found What I’m Looking For on her talk show. Clarkson has some 12.2 million followers who got to see the forwarded video.

Comments to Kelly’s tweet agree with her completely. One Twitter user wrote, “This waitress made me cry, she is BEAUTIFUL.” That user asked why everyone can’t be like her, calling her a “POWER RANGER.”

Another of Kelly’s followers said how much they love the manager for “throwing that trash out,” adding this is exactly how she should react and saying “Bravo!”

Clarkson has also been drawing attention to several important causes recently, using her celebrity power. One of these is the Black Lives Matter protests that have been taking place across America and around the world.

Amy Roloff Blasted By Fans For Using Instagram Filters
Stassi Schroeder Reveals First Photo Of Daughter Hartford – See The Adorable Pic!
Adam Busby Gives Update On Riley’s Head Wound
‘Bachelor’s’ Kit Keenan and MJ Snyder Get Dragged For Similar Apology
When Does The Next Episode Of ‘This Is Us’ Air?