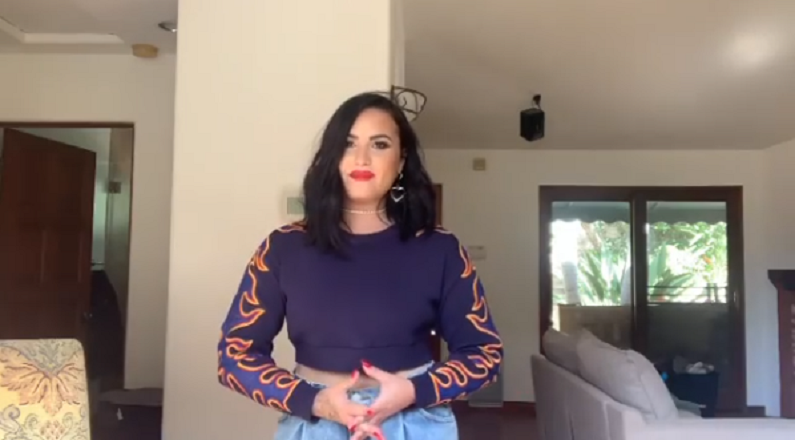 Demi Lovato is opening about her near-fatal overdose. It’s been two years and the singer is doing better. She’s been working on new music. She’s in love. Demi looks happier than ever on social media.

In a new interview, the actress teased her comeback album. Her upcoming world tour is on hold due to the ongoing coronavirus pandemic. Demi got real about her addiction, body image issues, eating disorder, and new management team.

Her old one was so bad that they prevented her from eating. She gives her new management team credit for saving her life.

Demi Lovato appears on the Bustle July 2020 digital cover story published on Tuesday, July 7. During the candid interview, the 27-year-old talked about her old management team.

“I used to have people watching me the night before a photo shoot to make sure that I didn’t binge or eat and be swollen the next day,” Demi said, as per Us Weekly. “It’s just a totally different world now…I don’t prepare for photo shoots, even. I can eat Subway for breakfast.”

We need change more than ever, so please keep taking action for racial justice, COVID-19 relief, and let’s make sure we are ready to vote and ask our friends and family to do the same!! I am SO STOKED to announce that I’m partnering with @propeller.la to auction off a collection of items that have meant SO much to me including ones that have been pulled directly from closet and as well as some of my photography. 🎉💖😝 The more actions you complete, the more you’ll increase your chances of winning 👀 New items will be added each week, so stay tuned for more to come!! You can start taking actions right now and enter for the first batch of items with the link in my story 💗

She credits Justin Bieber and Ariana Grande’s manager, Scooter Braun, for helping her get back on track after she finished treatment in 2019. The “Confident” singer revealed that she has “abandonment issues” when it comes to her interpersonal relationships. This led Demi to do a lot of reflecting while in rehab. She thought about what kind of relationship she would like with her manager. That’s when the singer knew she needed a team who would support her, no matter what.

She previously worked with longtime manager Phil McIntyre. But nowadays, Demi Lovato is feeling good about her body thanks to her new management team. Following her 2018 overdose and hospitalization, the singer wants to make a comeback with her seventh studio album and joint tour. Demi solidified her comeback at the 2002 Grammys and her lead single “I Love Me.” However, she made it clear that she doesn’t want to become known for her body.

“I want a career that has nothing to do with my body,” she told Bustle, as per Billboard. “I want it to be about my music and my lyrics and my message. And I want a long-lasting career that I don’t have to change myself for.”

This is what my bed looks like every time I get dressed 🤷🏻‍♀️🤦🏻‍♀️😝😂 Anyone else??

She recalled a time when she enjoyed listening to music. The pop star said that it would bring her “so much joy” when she was a young child. Unfortunately, she became cynical due to the “hustle and bustle of the music industry.” Demi recalls feeling “miserable,” and she doesn’t want to feel that way ever again. She wants to make music that brings her that same joy.

Demi Lovato also found love this year. She’s been dating The Young and the Restless actor Max Ehrich. In the interview, Demi confirmed that she’s been living with him amid the pandemic.

As TV Shows Ace previously reported, the couple is very serious. Max is so serious about Demi that he’s considering asking her to marry him.

‘When Calls The Heart’ Season 8: We Will See Elizabeth Move On With Her Romantic Life
Where Is ‘My 600 LB Life’ Star Steven Assanti?
Nanny Faye Chrisley Feels Like A ‘Sexy Kitten’ With Her Fresh Look
Sean Burke Spotted With Mystery Woman, Braunwyn Clarifies Comments
‘Below Deck Med’ Alum Tiffany Copeland Shares Exciting News