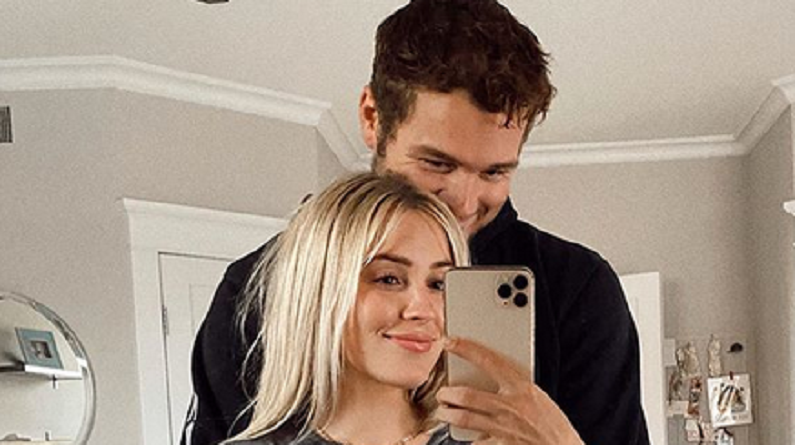 Cassie Randolph and Colton Underwood shocked fans when they announced their split. Their sudden breakup happened a month ago. While the two remained close friends, the romantic part of their relationship died. They even hung out recently.

As TV Shows Ace previously reported, Cassie did some reflecting on social media. She shared her thoughts on life, challenges, breakups, and everything in between. Now, she’s dishing more about her split in a new interview with Chris Harrison. She also revealed what really led them to split, and it’s not because of the coronavirus.

Cassie Randolph spoke out for the first time since her split from Colton Underwood. The couple met on Season 23 of The Bachelor, which first aired in 2019. She made an appearance on The Bachelor: The Greatest Seasons – Ever! to talk about their split. The couple shocked Bachelor Nation when they ended things on May 29.

“I think we honestly had a really great relationship the entire time, and we got along really well,” Cassie told Chris Harrison during Monday night’s episode, as per Us Weekly.

However, the 25-year-old reality star wouldn’t reveal the reason behind their split at the time. She called it a “sensitive subject.” Cassie has been in so much pain that she had to take a break from social media. She’s still processing all that they went through. The California native doesn’t want to talk about the split since Colton hasn’t spoken out about it.

The last 2 years I’ve been thrust into a spotlight after living a fairly normal life. Since then, I’ve been trying to learn how to navigate my life changes while also trying to cling to who I am. I used to think a platform would give me a voice, but in many ways a platform takes your voice. For someone like me it’s been paralyzing. I can overthink everything. It takes really thick skin to navigate constant drama, fake articles, nasty DMs & comments or rumors started by people who feel entitled to your personal life. It takes incredible mental strength to shrug off strangers who regularly criticize your character based on conclusions they drew while watching an edited tv show (I could say so much here). It can feel like an uphill battle. Sometimes I want to just say what I want & forget my sensitive side that strives to do the “right thing”, be calm & rational, be kind, think of others first etc.. I feel like saying: ok all you mother ffers hating on me for my breakup-please stop. It’s been an awful few months for ME trying to go thru it. I’m STILL going thru it. It’s hard enough w/out your know-it-all comments. You literally know nothing so go away. One minute I feel my rant above & the next I feel selfish thinking about myself when there are truly critical issues in the world right now: BLM, Covid, toxic politics, matters of life and death; social injustice. Kinda puts personal problems in perspective. Hence, the reason I decided (against advice) to cancel contracts & delete IG for 30 days. The break, tho short, was amazing. What did I do? I read a LOT, got a tattoo, caught up with friends, attended 2 protests, finished 60 HOURS OF SIMUCASE, re-evaluated my dreams and goals, went surfing, dyed my own hair, played my guitar, got out my sewing machine…lived in the moment. Life is short. We all have struggles to figure out. All we can do is the best we know in the moment so when we reflect, we don’t feel regret. Always be learning, always be growing. Ok, I’m done. A bit all over the place, but I’m forcing myself not to overthink. Thx to the majority of u who’ve been kind & sent concerned messages. It means more than u know ❤️ ily all (minus the trolls)

“We haven’t really talked about it publicly yet and I don’t know if either of us is ready, but I will say it’s been really hard,” Cassie explained. “I think going through any breakup is really hard but going through one in public comes with a whole set of challenges.”

However, she has “no regrets” going on the show or being in a relationship with the 28-year-old athlete. The biggest lesson that Cassie learned is to have more confidence. The grad student admits that she was “nervous” about going on the special.

The Bachelor Nation alum did want to put some rumors to rest. Cassie Randolph revealed that Colton’s positive COVID-19 diagnosis had nothing to do with their split, as per People. The couple quarantined together during the pandemic. Cassie and her family even took care of Colton while he was sick.

“Quarantine and COVID-19 had nothing to do with our breakup at all,” Cassie admitted. “I think if anything, that whole experience of going through him having COVID and being with my family kind of made us closer even. It was crazy because he was even one of the first people to get it, and I was like, ‘Of course,’ this would happen.'”

Yesterday was a bit of a rough day for me, and I was really struggling with just feeling sad. The announcement of an extended “quarantine” for LA just made it worse. A friend sent me a quote, and it made me look hard at having perspective. Life will never be perfect, and sometimes our hurdles are what shape us to become more whole. It’s too easy to overcomplicate life. Every persons idea of perfection is different and it will always be unattainable. We are always striving for more. Even when we accomplish something we wonder, “what’s next?”. Instead, every day should be approached with the purpose of finding wholeness and embracing who you are in that moment, despite circumstances. You can’t live a moment twice. That just kind of makes every moment seem a little more precious to me. “How liberating it is to pursue wholeness instead of perfection” -MHN So today I took my renewed perspective and went on a long, much needed walk on the sand. Feeling much better 🙂

Despite their split, the former couple is on “good terms” and is “hanging in there.” Cassie was afraid to discuss their split on the show. She told Chris that she was afraid of upsetting Colton. Multiple sources told People that their breakup was “amicable” and the pair just “weren’t on the same page.” The First Time author has not spoken out about the split since their announcement in May.