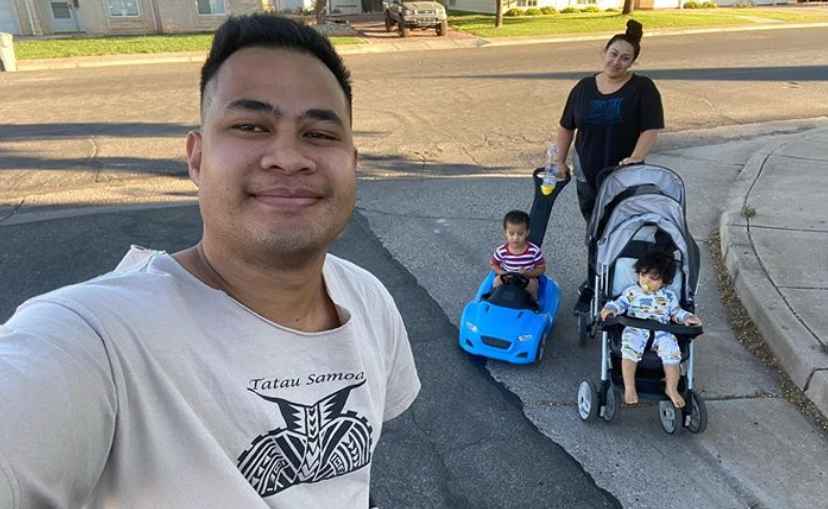 Things have been a little rough for 90 Day Fiancé: Happily Ever After? stars Asuelu Pulaa, 24, and Kalani Faagata, 31, recently. A series of tense arguments about their roles in their marriage came to a head on the Sunday, July 5 episode. In fact, it got so bad, Asuelu packed his bags and walked away from their home.

In Sunday’s episode of 90 Day Fiancé: Happily Ever After? Kalani speaks to the camera. She says Asuelu is still upset at her because she didn’t want to travel to Samoa with their sons, Oliver and Kennedy. The reason was a measles outbreak – not something parents want to expose their children to.

So, instead of visiting Asuelu’s family, they headed out from Utah to California. Asuelu and Kalani spent a weekend getaway, celebrating Oliver’s second birthday. As noted in In Touch, things got touchy in the car after Asuelu complained about Oliver crying during the car ride. Kalani says maybe they should switch places, so Asuelu could care for their sons instead.

At first, Asuelu was reluctant, but eventually, Kalani hops into the front seat, while he gets in the back with the kids. Kalani then asks Asuelu how he was getting on in the back seat. He then makes the mistake of saying “I’m doing alright. This is very easy.” Kalani swiftly responds, asking him if he thinks her job is easy and he nods, yes. He refers to his “power and magic.”

Kalani’s mom was driving at the time, but she decides to put her two cents into the conversation. She asks Asuelu whether he thought all women’s jobs were easy? Or is it just Kalani’s job that is easy? With two women banding up together, Asuelu makes the mistake of saying, “Women’s jobs.”

Both Kalani and her mom are shocked by Asuelu’s response. Kalani’s mom asks him if he felt the same way about women in Samoa? He answered by saying he believed American women’s jobs are easier than in Samoa.

In his defense, Asuelu explained in his confessional why he believed women’s jobs were easier in America. He says this is because they have washers, dryers and dishwashers doing so many of their chores. Asuelu reckons they can then sit with their children watching TV.

Kalani was mad at Asuelu’s response. She asks him from the front seat, who has been up every night with both their sick kids, while she is also sick? Pulaa responds, “You, and I woke up sometimes.” Kalani calls out Asuelu as a liar. Things then get nasty, as Asuelu calls his wife a “lying b*tch” – not something you do when trapped in a car with your mother-in-law. Kalani asks him if he thinks her job is easy, why doesn’t he get involved and help? He responds that taking care of the kids and the household is a “woman’s job.” Kalani laughs, to which he responds that the sound of her voice is so f**king annoying, too.

Kalani’s mom comes to her daughter’s aid again, asking Asuelu if he would talk that way to Kalani in front of his own mom. He responds by saying, it is his wife, and he can say whatever he wants. Mom responds by telling him to try talking that way in front of Kalani’s father, then. She goes on to call Asuelu disrespectful to her and her daughter.

They both love the sound 🐎 🐄 😂 #justforfun

While they eventually make it to their destination, things were still tense in the car. At the rental, Kalani tries to speak to Asuelu in private, but this leads to another argument. Kalani accuses Asuelu of manipulating the subject. He responds by asking her why she uses “those expensive words?” Asuelu asks if Kalani thinks he is a boy who expects those words.

Kalani’s response was that she would expect a Samoan boy to come to America and turn into a man, as she walks away.  Asuelu then tries to defend himself in his confessional by saying it is hard for him to express himself, due to his limited skills in English. He believes Kalani is misunderstanding him due to the language barrier.

The latest fight ends with Asuelu grabbing his belongings and leaving the rental without telling anyone where he was going. Little Oliver tries to follow his father, who doesn’t even look back. Kalani calls after him but tells her mom she can’t chase after Asuelu with her child.

The TLC cameras follow Asuelu to a bus stop close by, where he tells them to take his mic pack from him. He then climbs on a bus back to Utah.

Keep watching to find out what happens to Asuelu and Kalani on 90 Day Fiancé: Happily Ever After on TLC on Sundays at 8 pm ET.