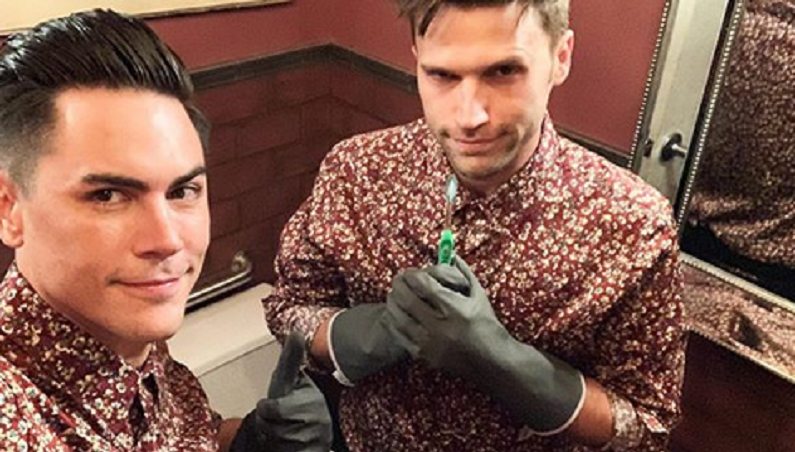 Tom Sandoval and Tom Schwartz have a lot to celebrate. Both Toms scored some gigs. This comes after Bravo fired their former Vanderpump Rules co-stars Stassi Schroeder and Kristen Doute. The TomTom bar owners had a virtual happy hour for their fans.

This is their first appearance since the firing frenzy. Aside from Stassi and Kristen, Bravo also fired Max Boyens and Brett Caprioni. Sandoval shared their virtual drinking session on Instagram. Additionally, the reality star wants to expand his own empire without Schwartz. Learn the details behind Sandoval’s new gig. Meanwhile, fans want to know what will happen to the show.

Tom Sandoval and Tom Schwartz are back together

As per The Blast, Tom Sandoval shared their virtual drinking session on Friday, July 3. He took to Instagram to tease the details of the online party. In the photo, Sandoval and Schwartz look chic in their matching suits.

“CLICK LINK in Bio, to book a private zoom celebration with @twschwa & I TOMORROW on 4th of July!” Sandoval captioned the post. “We’ll be hanging out, making cocktails, I might bust out my trumpet… u know, the usual!”

CLICK LINK in Bio, to book a private zoom celebration with @twschwa & I TOMORROW on 4th of July! We’ll be hanging out, making cocktails, I might bust out my trumpet… u know, the usual! We are only taking 15 people, so space is definitely limited 20% of what we make will go to @theuwcofficial

However, space was limited for the event. They only accepted 15 reservations. In addition, 20% of what they make will go to the Unique Woman’s Coalition, a “non-profit created to address the emerging needs of Black Trans community.” Schwartz didn’t post about the event. He has been quiet on social media, for the most part.

Tom Sandoval has plans to have his own empire. The Vanderpump Rules star took on a new venture amid the Bravo firing drama. He wants to go beyond the bar and dive into the world of cosmetics, as per The Blast. He collaborated with a makeup company that’s marketed to men and he couldn’t be more excited.

Sandoval announced his new venture on Tuesday, July 1. His news comes as fans wonder about the future of VPR. The 36-year-old Bravo personality took to Instagram to share the exciting news. Sandoval told his followers that he’s been a fan of Stryx for years.

“They do concealer and tinted moisturizers specifically made for men,” Sandoval said in the clip while showing off the products. “I just want to say that I’m officially part of the company!”

Sandoval had more to say about the cosmetics line. In fact, he couldn’t stop raving about it. The TomTom owner says he’s “obsessed” with their products and revealed that he’s “officially part of the company.”

As per TV Shows Ace, Bravo fired Stassi and Kristen after their former co-star Faith Stowers recalled a time when they racially profiled her. Meanwhile, Brett and Max lost their gigs for their past racist tweets. The network has yet to announce any more firings, leaving fans to wonder if Season 9 will even happen.

What are your thoughts on Tom Sandoval and Tom Schwartz’s new gig? Sound off below in the comments section.