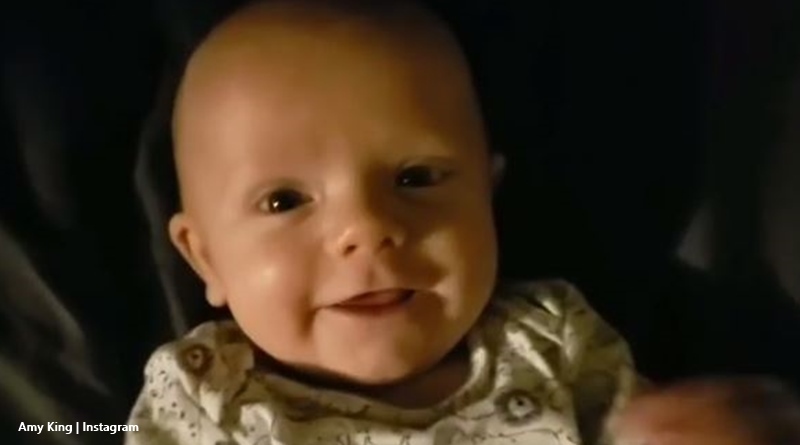 Duggar cousin, Amy King birthed her son Daxton Ryan in October last year. Since his birth, she has shared many charming photos and videos of her gorgeous son. And now, she shared that Daxton celebrated his first 4th of July. Amy shared a video of the fireworks show and also posted up a photo of Daxton’s reactions. Fans loved it and laughed at the guy little guy.

On her Instagram, Amy showed some noisy and bright fireworks going off. She said, “You gotta see this little guy’s reaction to his first firework show! Swipe to see!!” The first video showed the fireworks. And swiping, the photo of Daxton came up. People laughed because he sat in his mom’s embrace fast asleep. He wore some headphones, so he never heard anything anyway. Lots of people thought that Amy got a great idea using those ear-coverings. Actually, very small kids become very afraid of all the bangs and flashes, a bit like pets do.

One Duggar fan said to Amy, “What kind of headphones are those? My daughter hates loud noises. These might help her.” Another fan agreed that’s a great idea as she hates seeing the little kids so afraid of the noise. Other fans noted that the earphones seemingly did the trick. One said, “He slept through it! Wow. Those are some impressive earphones.” Amy never said where she got the headphones from. But if you worry about your child, there’s plenty of baby-friendly ear muffs out there at places like Amazon.

You gotta see this little guy's reaction to his first firework show! Swipe to see!!🎇😂

Some parents wonder if it’s okay for them to take their baby along to fireworks shows. Parents.com reported that you can take your baby along. But naturally, kids all react differently. Some of them love staring up at the bright lights. But, other kids become afraid when the bangs go off. For one night of fireworks, they suggest you don’t worry about the loud noises damaging hearing. However, it’s a great idea to sit quite far away from the show.

Another thing they recommend, much like the Duggar cousin did, is to take along earmuffs of some sort. Also, a kid tucked into a carrier probably feels a bit more secure in the strange surroundings. But, some people get lucky. This fan of Amy King wrote, “I was scared my 2 month old would be crying last night from all the neighbor’s fireworks (she was inside because we didn’t have earmuffs). She never flinched once! If the house creaks she flails awake but fireworks? Nah man we good.” Still, until you try it, no parent really knows how their child will react.

Do you agree that taking along headphones or earmuffs seems the right thing for little babies at fireworks shows? Sound off in the comments below.

CAT-astrophe? ABC Hired Audience Member To Kiss Connor On ‘MTA’
Did Duggar Cousin Amy King Take ANOTHER Dig At Josh Recently?
Todd Chrisley Reaching Out To His Hurt Child, Which One?
TLC: ‘Say Yes To The Dress’ Meets ‘Seeking Sister Wife’ In New Episode?
‘Below Deck’ Kate Chastain & Ben Robinson Get Cozy On The Couch