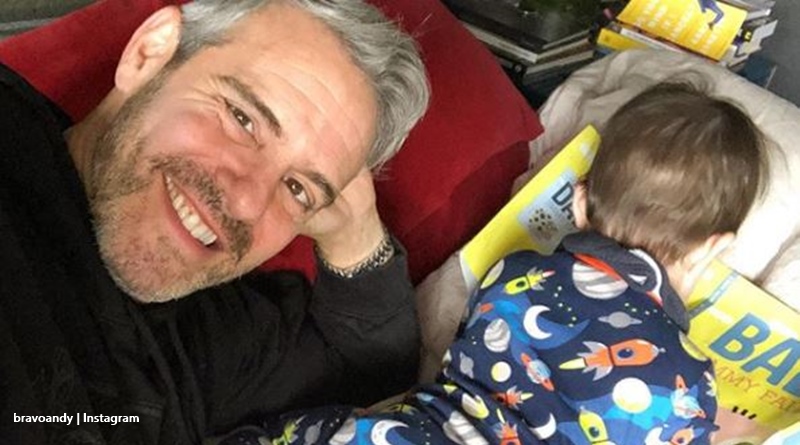 Andy Cohen shared over the weekend that he took Ben down to the water’s edge. The Bravo host mentioned that Ben just loves eating sand. Later, he updated on Instagram Stories, revealing again that Ben eats sand and enjoys trucks. The cute little boy seems so active these days. But, Andy told his fans maybe a bit more than they need to know about sand eating.

On the 4th of July, Andy dressed up Ben in patriotic colors. They went down to the water’s edge. Andy said that he’s a sucker “for a theme outfit!” Then, he mentioned that all Ben really wanted to do was “eat the sand.” Now going on about 17 months old, naturally, he toddles around a lot. Actually, he looks set to be a big “brother” of sorts to Anderson Cooper’s little boy. Andy and Anderson are close friends, so their little boys are getting to be friends too. And, he likes to pick up and eat sand. Fans responded to the post about Ben and one said, “You only live once Andy…..let him have fun and eat sand!!!!”

But another fan of Andy Cohen noted, “don’t eat sand you’ll get worms yuck 🤢.” Another fan noted that Andy no doubt sees it when it comes out “in the diaper.” Maybe Andy saw that comment and checked for it. Later, in his Instagram Stories, he talked about checking for it. As Andy said in his short clip, maybe it’s all a “bit too graphic.” Anyway, he can’t find the sand in there. That seems a bit of a mystery. “Corn on the other hand…”

I’m a sucker for a theme outfit! (He just wants to eat sand…) enjoy the day everybody…

While that one fan said “yuck” and mentioned “worms,” it seems eating sand might not be all bad. According to Kinedu, it might even be a good thing. The website explains that “when your little one is outside in contact with dirt or sand, he’ll probably have a handful of it in his mouth before you can stop him.” That seems to be something that Andy deals with right now. And it’s too late by then. Sand goes down into the tummy the same as everything else. But, the site also notes that parents need not panic.

Apparently, consuming dirt and sand could actually help boost a kid’s immune system. Obviously, parents need to keep a watchful eye and they really shouldn’t sit down and dine on it for breakfast. The most important thing is to check the child’s not eating fecal matter, cigarette ends, or sharp pieces of shell. Andy Cohen probably shouldn’t stress too much. And, even if Ben eats something horrid, hopefully, the worst that happens is a touch of diarrhea. But, the site notes that if the child gets sicker and starts vomiting, it might be an idea to see a doctor.

Did your child eat sand and survive the experience? Or did they get sick enough to need a doctor’s visit? Sound off in the comments below.