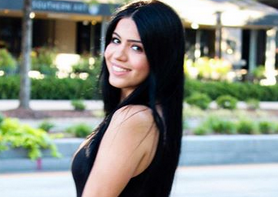 90 Day Fiance star Larissa Dos Santos Lima has a rough past with her ex-husband, Colt Johnson. Now, a year after their divorce, Larissa has been spilling lots of details about Colt, especially his flaws. She recently called Colt’s new girlfriend, Jess Caroline, to tell her everything she needs to watch out for. While Jess seems to trust Colt, Larissa advises her to be careful.

When Larissa found out that Colt had a new girlfriend, she worried that Jess would be oblivious to Colt’s past. Larissa believes that her ex tricked her, manipulated her, and cheated on her. She doesn’t want him to hurt other women in the same ways. So, on the July 5 episode of 90 Day Fiance: Happily Ever After, she called Jess. Larissa wanted to make sure Jess understood what she was getting into.

At the beginning of the phone call, Larissa stated, “Jess, Colt is a demon.” She also explained that Colt is charming at first but will turn on his girlfriends. She said that everyone likes him at first, but then they find out that he’s “mean” and “dangerous.”

In addition to her attacks on Colt, Larissa also told Jess that his mother, Debbie Johnson, is crazy. She said, “Be careful, she’s a wolf. She is like, insane.” In late June, the 90 Day Fiance star accused Debbie of helping Colt get rid of Larissa.

Despite all of the negative things that Larissa pointed out, Jess is still on Colt’s side. Jess believes that Colt is good and that Larissa is exaggerating. She doubts most of Larissa’s claims. Larissa thinks that Colt cheated on her, even though Colt says otherwise. She says that Colt was talking to other women and “was very shady.” But, Jess isn’t falling for it.

Larissa also believes that Colt is trying to deport her. Because Jess is also from Brazil, Larissa felt the need to share this fact with her as well. Larissa told Jess that she may be next. She said, “Once he doesn’t need you anymore, he’s gonna try to do the same thing that he did to me.” However, Jess’s opinion of Colt remained unchanged. She continued to doubt Larissa.

90 Day Fiance star Larissa admits that this is payback

After her phone call with Jess, Larissa revealed her reasons for making the call. She first explained that she wants to look out for Jess. Then, she admitted that she wanted revenge on Colt for everything he did to her. She said, “It can be [called] sabotage, it can [be] called any name, but I’m not going to be quiet when I know who Colt is.”

Do you think Larissa meant well when she asked to call Jess? Let us know your thoughts in the comments.