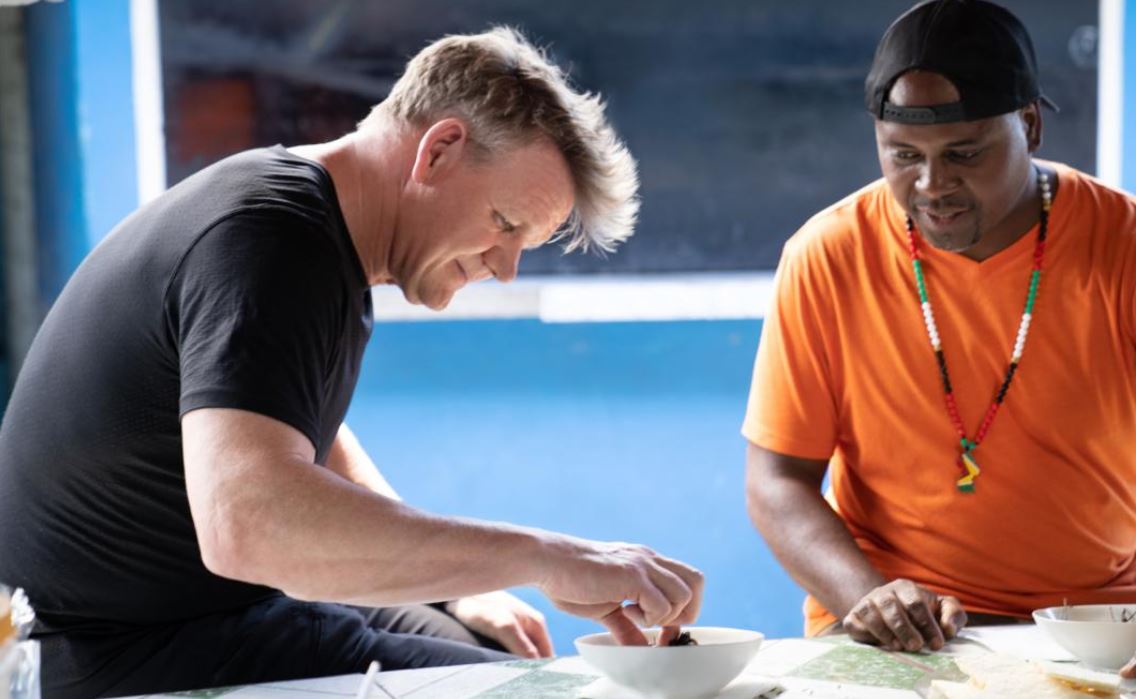 Guyana’s popular chef, Delven Adams, who owns and operates the Georgetown’s Backyard Cafe, will  be introduced to audiences for this edition of National Geographic TV series Gordon Ramsay: Uncharted.

He opens his show in the the city of Georgetown. Guyana is located on the northern edge of South America, and the English speaking nation is mostly made up of rainforest and jungle.

Guyanese cuisine is introduced to Gordon by chef Delven Adams. The cuisine is influenced by the combination is a mix of many indigenous and European cultures combined with the unique ingredients of the region.  The end goal? Gordon must make a sumptuous feast for a local Macushi chief.

In the episode, Gordon says of Guyana: “Guyana has to be one of the most uncharted adventures ever for me…trust me, Guyana is a place I will not be forgetting about for years.”

What does Gordon do on Uncharted tonight?

Chef Ramsay heads deep into the South American rainforest to explore the culinary roots of Guyana. The one-hour episode takes us to the jungle around Rewa, a small Amerindian community found in the North Rupununi of Central Guyana.

Once he collects what he needs, he shares his bounty of jungle provisions as he join forces with local rising culinary star Delven Adams to cook a feast for the local Amerindian tribe.

We see Gordon rappelling from a helicopter into the jungle to meet up with native guide, Rovin Allen.

It is Rovin who introduces Gordon to the local ways of hunting. The two hunt for toothy caiman and Gordon also fishes for piranha with a bamboo rod and tucks into a goliath birdeater tarantula, a “snack” he was introduced to also by Rovin.

Thanks to his resourceful Amerindian guide, Gordon learns how to enjoy roasted the chicken and crab-like meaty tarantula and excel at catching a caiman with his hands.

While there, Gordon is taught how to use indigenous cooking methods, using the cassava syrup cassareep, a main ingredient in Pepperpot, one of Guyana’s popular meals. For this meal, Rovin instructs Gordon to the proper technique to get the cyanide poison out of cassava. This is a necessary ingredient he needs for his final feast.

The only fail was an earnest attempt at fishing for Arowana at night. This was to be for the planned feast, as this tasty freshwater bony fish was part of the menu.

But plans are fluid on the episode tonight as Gordon—with Rovin’s help—used a homemade bow and arrow to attempt to get this fish and after many near misses, the two gave up and rethought the meal.

Gordon Ramsay dives, fishes, forages and leaps out of helicopters on another action-packed adventure in the pursuit of food.

Nothing is off the charts for Uncharted.