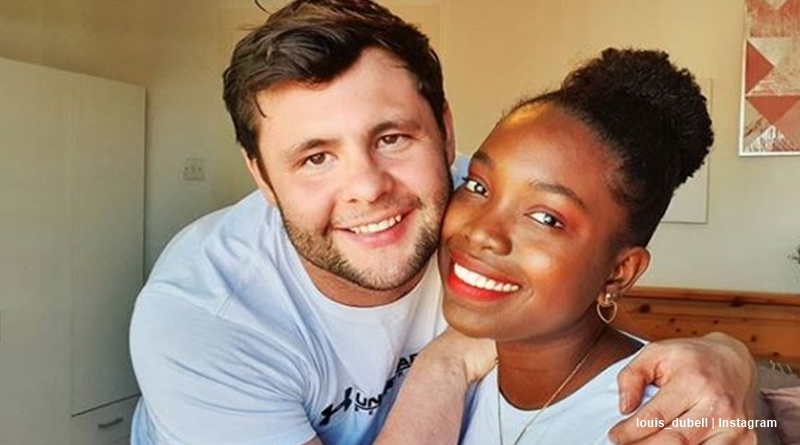 90 Day Fiance alum, Abby St. Germain announced back in March that she and her British beaux, Louis Dubell married. She sounded extremely happy. But now it turns out that a few weeks ago, he discovered a lump in his testicles. It turned out cancerous, and he awaits further treatment.

Abby featured in Season 1 of Before the 90 Days. She came from Haiti and she became engaged to Sean Hiller from Springfield, Ohio. The relationship failed, and they split. In December last year, she told her fans she met Louis Dubell and he lives in the UK. Very excited when her spousal visa came through she rushed there to the man she felt would make her happy for the rest of her life.  Later, she revealed the happy news that they married in the UK.

Now, Louis announced that he got diagnosed with cancer, just months after the happy event. He shared a photo of himself with Abby, and in his caption, he talked about her family in Haiti. He told fans how much support he got from his wife Abby, his relatives, and his “extended family across the water in Haiti.” Apparently, he struggled with his cancer diagnosis for about 7 weeks now. But, he sounds determined to deal with it in a positive way.

After he discovered the lump, he went for scans and blood tests. It seemed not too bad, but surgery revealed it was cancerous. However, he sounds hopeful. He said that soon, he goes into a special cancer hospital where he undergoes some chemotherapy. After that, further scans will hopefully reveal it didn’t spread anywhere else. He ended by giving other men a shoutout reminding them they should check themselves every now and then.

90 Day Fiance star Abby obviously loves a very positive person. Determined not to let his cancer get him down, he wrote, “positivity in life is key to everything. It’s what keeps you from drowning your soul.” Then, he ended by thanking everyone who keeps on rooting for him. One follower wrote, “Sending you love and healing prayers, and I am so glad you have such a wonderful support system. With your beautiful wife, I know you’re in good hands. God bless you, and I hope this is the end of it too.❤”

I just want to thank my wife, mum, dad, brother, sisters, auntie, my extended family across the water in Haiti and my friends for being there for me these last 7 weeks it's been really emotional at times and stressful but you're the ones that have kept that smile on my face through it all and drove me on to stay so positive. I love you all💙 i will cut the story short but a good few weeks ago I found a lump on one of my testicles I got sent straight for an ultra sound scan, when I got my phone call for the results i was told I have a tumour, Iv been in and out of the hospital for blood tests, full body ct scan ect everything was clear on the full body scan, that was 5 weeks ago. I had surgery just over 2 weeks ago I just had to wait for the biopsy results it came back that it was cancer unfortunately but hopefully the worst is over🙏🏻it's not quite over yet it's been a good few weeks since I had my full body ct scan at the beginning of all this so il be heading to a hospital for cancer patients soon to maybe have a small course of chemotherapy just incase it has spread in anyway. Then shortly after I will have another full body ct scan praying I have the all clear🙏🏻remember lads just give yourself a couple of minutes every so often and check your testicles because it's so easy to miss! I always say this but positivity in life is key to everything. It's what keeps you from drowning your soul. Thanks again everyone you kept me going through all this🙏🏻👊🏻 #love #wifey #cancer #positivity #positive #fuckcancer

What is testicular cancer?

Cancer Net explains that testicular cancer often presents as a small lump under the skin. Sometimes, men also experience breast tenderness due to hormonal changes. While the lump could also just be a cyst, it’s best to get it checked out. If diagnosed early enough, surgery and follow up treatment might prevent it from spreading further.  Luckily, it sounds like 90 Day Fiance star Abby’s husband didn’t wait around and took very quick action.

‘Sister Wives’: Maddie Gets A Grip – Shocked By Her Own Behavior
‘Teen Mom OG’ Star Catelynn Lowell Opens Up About Her Miscarriage
Kaley Cuoco Thanks Fans, ‘Truly Touched’ By Love And Support Over Loss Of Dog Norman
Shannon Beador Reveals Why Her Face Looked Odd At ‘RHOC’ Reunion
Clare Crawley Sees Sick Mom For First Time in Months