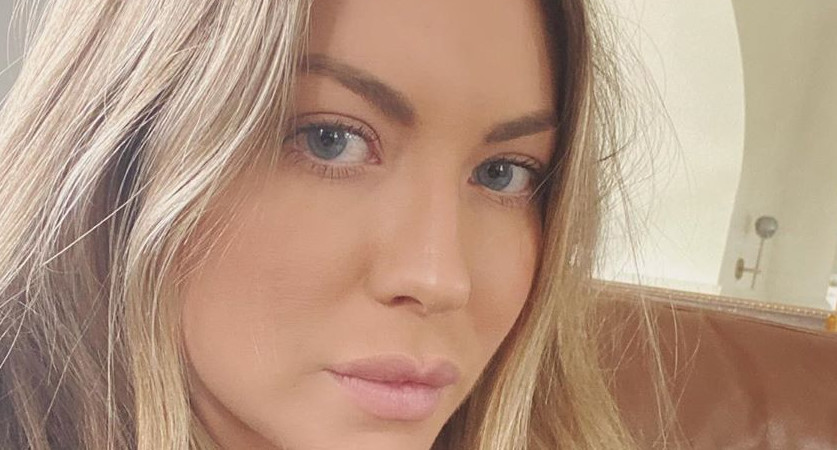 Bump watch! Vanderpump Rules alum Stassi Schroeder is pregnant with her first child. She will be welcoming a baby girl in early 2021 with her fiancé Beau Clark. The reality star confirmed the news with a sweet photo of her baby bump last week.

It was her first social media post since she lost her cushy job with Bravo after mass firings. Stassi, along with Kristen Doute, Max Boyens and Brett Caprioni. were let go in June after past racially insensitive behavior came to light.

Days after her firing, news of Stassi’s pregnancy leaked, with her confirming it with a baby bump picture. Since that time, Stassi has been silent on social media but she shared another baby bump picture on Thursday, July 2.

As fans of Stassi know, she often posts #OOTD photos – Outfit of the Day. At least, she did before her firing. Not so much since then. However, it seems her daily posts may be on the way  back.

With an accessory. A cute baby bump. While Stassi didn’t use the hashtag in the photo, she’s posing in the mirror typically reserved for her #OOTD.

In the photo, Stassi is wearing an all-black ensemble, including capri pants. She cradles her ever-growing baby bump.

Stassi and Beau were planning to wed in Italy in October of this year. Obviously, that’s off now that she’s pregnant. But the couple changed their plans even before Stassi had a bun in the oven. Good thing because travel from the U.S. to Europe is on hold for the time being.

Now the wedding is tentatively set for October 2021, but that was before Stassi was expecting a baby. It was also before Stassi lost her job with Bravo. She may have to scale back the wedding of her dreams without sponsors or a television audience to offset the cost.

While Stassi is basking in her pregnancy, her former VPR co-star was experiencing the sadness of a miscarriage. Scheana Shay has been open with viewers about her fertility issues, even undergoing several egg retrieval procedures to freeze her eggs.

Scheana recently got a happy surprise when she ended up conceiving a baby naturally with boyfriend Brock Davies. But happy tears quickly turned to sad tears when she lost the baby at six weeks.

The loss coincided with Stassi’s pregnancy announcement. While Scheana originally offered her well wishes for Stassi, she also recently admitted that it is “hard” to see her co-star pregnant.

Stassi’s fiancé is over the moon with ‘girl dad’ vibes. According to The Blast, Beau recently took to his Instagram Stories to joke that the diaper aisle in the grocery store will soon be his “new home.”

‘Sweet Pecan Summer’ Is Part Of Hallmark’s Summer Nights Part 2
Busby Family Share Big Plans For Next Week’s Summer Break Excursion
Savannah Chrisley Under Fire For Catching A Shark: Did She Release It?
Todd Chrisley Admits His Wife Julie Has Way More Class Than He Does
Kim Kardashian Sets Instagram On Fire With Unbuttoned Daisy Dukes