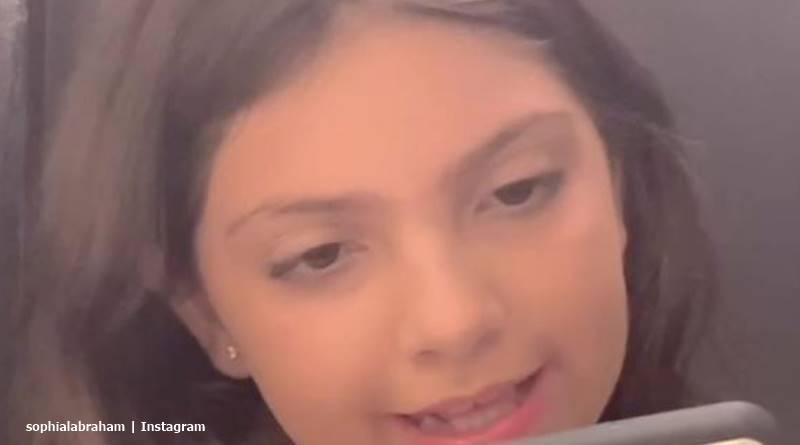 Teen Mom alum, Farrah Abraham gets slammed almost every time she shares a photo or video of her daughter Sophia. Disgusting people even call the child a “monkey.” But sometimes, people forget Sophia lost her dad who passed away very young. Luckily, she enjoys a good relationship with her dad’s father’s family. Farrah talks about how she really “craves” contact with that side of her family.

In December last year, Farrah shared a video of herself and Sophia preparing for a visit to her ex’s grave. Everything Farrah shares gets slammed, and that post got loads of criticism from haters. Derek passed away from a car accident before Sophia was born. So, she never met her father. But, she knows about him as she sees Derek’s mom. Fans know Farrah and Derek’s mom clashed a lot. But, she makes sure her daughter meets and knows Derek’s family.

Speaking to InTouch Weekly this week, the Teen Mom alum told them that Sophia “craves” contact with her dad’s family. Farrah’s own parents seem very supportive of their daughter and granddaughter. But, the child shows a lot of interest in her father’s family as well. It certainly sounds like Farrah and Sophia get on very well with Derek’s dad. She told the outlet how “grateful” she feels for Derek’s “side of the family.” They visited them recently and Sophia seems happy as she “craves getting to know her father’s side of the family.”

Family makes up for lost father

During her conversation, Farrah said that Sophia finds comfort knowing her father’s side of the family because she “doesn’t have her dad.” Sophia never grew up in a conventional family. She never knew her father. Plus her mom and grandmother clashed. Now she grows up homeschooled by Farrah and many people think Farrah treats her like an adult. Now that Farrah works in the adult entertainment industry, even more fans hate on her and her daughter. They believe Sophia becomes exposed to way too many things she’s not old enough to experience just yet.

However, the fact that Farrah takes the time for Sophia and Derek’s family to interact also shows the value of family. At least they bring some sort of normal to Sophia’s life. Farrah gets hated all the time, which isn’t normal. And, Teen Mom fans agree Sofia shouldn’t follow her mom’s social media because of that. Even Farrah’s Father’s Day post got slammed. One ignorant person wrote, “Interesting she makes such a big deal about daddy derek’s death day, never mentions him on Father’s Day or go and visit his grave or his family.”

So happy to get to see my dad on Father’s Day! Syrian tradition with rack of lamb! Thankful my dad has had me as his best man at his wedding this past year & has always taught me I am a equal to men & helped support me in times where men wanted to disrespect, take advantage, & hurt a woman. Thanks to my dad for taking the time in therapy with me and all the work we’ve done to have the best father daughter relationship it’s one I’ve always envied, God is good❤️A crazy before & after since the beginning of 16&Pregnant day til now ❤️🙏🏼blessed ❤️🙏🏼 & to all the amazing other men in my life who helped me growing up in life’s toughest growing pains forever thankful & grateful my love to the heavens 🙏🏼#fathersday #dadday #ilovemydad

Actually Farrah and her daughter Sophia visit his grave a few times a year. But critics even hated on that. Plus, Sophia spends time with her dad’s family, after all. It looks like Farrah can’t win when it comes to Teen Mom haters. Hopefully, getting to know Derek’s family turns out a win for Sophia.

Meri Brown Leaves Arizona, Gives Fans Hope That She’s Leaving Kody
Lisa Rinna Stars In New ‘Days Of Our Lives: Beyond Salem’ For Peacock
Will There Be ‘When Calls The Heart’ 2021 Christmas Movie?
‘Dexter’ Revival: Release Date, Cast, What We Know So Far
Joy-Anna Forsyth Pregnant?! Another Duggar Baby On The Way?