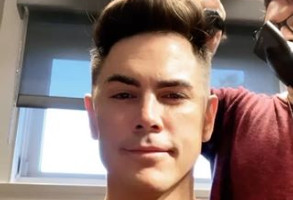 Vanderpump Rules star Tom Sandoval has exciting news for his fans. The former model is partnering with Stryx for a line of skincare specifically for men. Long-time VPR fans know that Sandoval takes his skincare routine very seriously. In fact, viewers saw back in Season 1 that he routinely shaves his forehead as an exfoliant.

His former co-star and ex-girlfriend, Kristen Doute, wrote about Sandoval’s beauty habits in her book He’s Making You Crazy. She said that Sandoval had more beauty products than she did when they were dating.

Vanderpump Rules star Tom Sandoval kicked off July by sharing a business announcement with his fans. He wrote on Instagram that he’s teaming up with Stryx for a line of men’s beauty products. He said,

“Hey everyone, I don’t know if you remember me talking about this company Stryx before. They do concealer and tinted moisturizers specifically made for men.”

Then he shared some exciting news with followers, “ I just want to say I’m now officially part of the company!”

The brand will be sold in CVS pharmacies “nationwide,” Sandoval said.

Us Weekly reports that Sandoval previously posted a video to his social media of him using the company’s product. The outlet reports that he did a video tutorial on how to use the line’s concealer.

A fan asked Sandoval if he uses concealer “every day,” but Sandoval said no, just “pretty often.” He added that “a little under the eyes” makes him look younger.

While most fans were congratulatory with their comments, one fan took a different tone. A follower wrote, “What men were [sic] makeup.” Sandoval saw the comment and chose to answer.

Furthermore, the VPR star estimates that “15%” of regular men are wearing makeup daily. It depends on where you live, he said.

The fan wrote back that he comes from “a different hood” than Sandoval. In addition, he believes “Jax would s**t his pants.”

Another fan pointed out that Jax, too, probably wears makeup.

Has Sandoval Replaced Jax as the ‘Number One Guy in the Group’?

However, as Jax becomes more and more problematic, fans are giving that honor to Sandoval. In fact, GQ magazine recently did a spread with Sandoval, declaring HIM the “number one guy.”

Funny enough, in the article’s cover photo, Sandoval is applying makeup under his eyes. Hopefully it was Stryx brand.

Sandoval assures fans that he will let them know when the products are available in stores. Check back with us for updates on whether Bravo will bring Vanderpump Rules back for another season or cancel it completely.