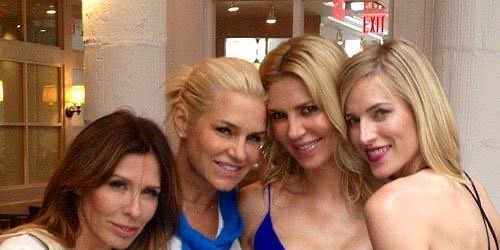 The Real Housewives of Beverly Hills star Brandi Glanville tells it like it is. Or how she thinks it is. She recently spoke out about which Real Housewives stars are her least favorite. And her answer was not Lisa Vanderpump or even any of the RHOBH stars.

It’s hard to believe, but Brandi isn’t an original member of The Real Housewives of Beverly Hills. She appeared as a ‘Friend’ in Season 2 before joining full-time for Season 3. Bravo let Brandi go from the franchise after Season 5. But she still appears in a ‘Friend’ role occasionally.

Viewers will see her pop up later this season to dish some dirt on RHOBH’s Denise Richards. According to Brandi, the two were hooking up despite Denise’s marriage to Aaron Phypers. Denise denies the allegations and fans will have to wait to see it play out on-screen.

Brandi recently stirred things up on Twitter by posting a photo of Denise kissing her on the cheek. However, RHOBH’s Camille Grammer told fans the photo was from Denise and Brandi’s Season 9 meet-up for drinks.

Ugh. That was season 9 while filming when they met up for drinks. 🙄🤥 pic.twitter.com/YvQWniaq8i

The former model recently chatted with The Rumour Mill podcast about all things Bravo. When fielding the question of her least-favorite Housewife, Brandi gave two answers. Brandi called out The Real Housewives of Orange County stars Vicki Gunvalson and Tamra Judge. Both quit (or were fired, depending on your source) the show earlier this year after an offering of smaller roles on the show.

Brandi’s issue with the RHOC stars? They do the “same thing”. She says, “I’ve just kind of been like … ugh, I’ve seen them do the same thing, it’s just like one-trick ponies. They had no new stories.”

She further accuses the stars of going to the “most obvious place” for drama.  As fans may recall, the two spread a rumor about Kelly Dodd’s bedroom habits during Season 14.

She Thinks RHOA is ‘More Real’ Than RHOBH or RHOC

While Brandi puts down Vicki and Tamra, she has nothing but praise for RHOA and Porsha Williams. In fact, she thinks that the RHOA stars are “more real” than the California counterparts.

She is especially impressed how Porsha lets all her dirty laundry air on the show, including “her man cheating on her.” Brandi has nothing but nice things to say about Porsha, despite only meeting her once. She describes Porsha as, “bubbly and pretty and sweet and positive and funny. I just love her.”

Fans agree, especially after Porsha’s snappy one-liners at the RHOA Season 12 reunion in May.

Which Franchise Would Brandi Join Next?

While Brandi loves RHOA, there is another franchise she’d love to join. The Real Housewives of New York. There’s just one problem, Reality Blurb reports. She “might kill” Ramona Singer, Brandi jokes.