Duggar fans previously heard that Joy-Anna and Austin Forsyth won’t be returning to TLC’s Counting On for Season 11. The reason for this was unclear. As TV Shows Ace reported, Joy and Austin will only be in group settings. So, they won’t have their own storyline. They will be around for special occasions and family gatherings.

Longtime followers of the Duggar family know all about Josh’s rough past. For this reason, he and his wife are no longer on TLC. And, there was no announcement that anything had changed.

Now, Jessa Seewald is hinting that Joy and Anna might be on the new season of Counting On.

Are Anna Duggar and Joy-Anna Forsyth going to be on Counting On?

In a new Instagram story this week, Jessa shared a promo photo for the new season of the family’s TLC show. In her story, she reminds fans that the show returns on July 7. When she shared the story, the premiere was only one week away. Now, it’s even closer.

In her post, she tagged most of her family members who use Instagram. What’s interesting is that Jessa tagged Anna and Joy in her Instagram story. As far as we know, all those tagged, aside from Joy and Anna, are on the show. They are included in the trailer and the promo shoot too. But both Joy and Anna are missing from the Counting On promo shoot, as they supposedly weren’t going to be on the show. 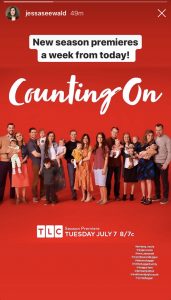 As mentioned, Joy and Austin are going to be a part of some of the Duggar family’s gatherings. They just won’t have a storyline of their own like most of the other Duggars do. Perhaps Joy and Anna will be in the show more often than we realized. Of course, since they will be in the show for group settings, it’s possible Jessa tagged them for that reason. Maybe she didn’t want to exclude them

Only time will tell exactly what’s going on. When the new season starts airing, fans will be able to see how big (or small) of a part these two women play.

So, do you think Jessa was simply tagging all of her relatives? Or do you think that Joy and Anna will be playing a bigger role in the show than originally thought?