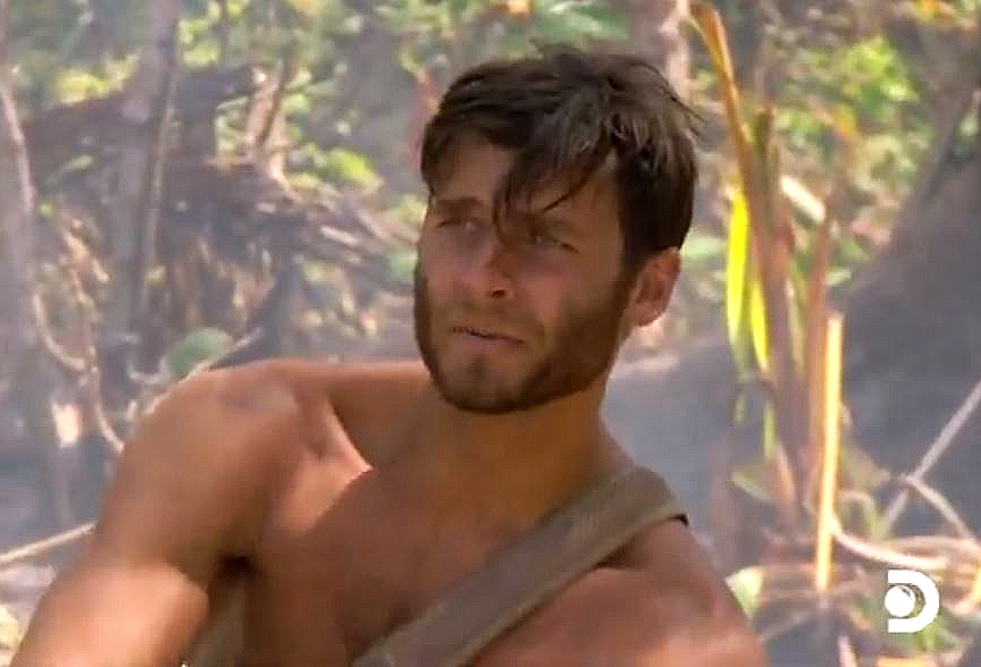 TV Shows Ace has an exclusive preview of Thursday’s episode of Treasure Island with Bear Grylls on Discovery Channel.

It’s a race to the latest dropped prize by helicopter as the fittest of the bunch are in a dead heat for it.

Now we have reached milestone moments in the series. Ex-military Marine man Marco D’Andrea is solo, as Ben Kandel and Jack Tyrimos are together in a boat offshore. The three are in a dead heat race to get a money case dropped in full view of the entire tribe.

The older women, Irene Cattanach and Morag Barson, are eager to try for it, but Marco runs off so fast that they know they are at a huge disadvantage.

The premise centers on twelve strangers who are dropped on a deserted island trying to stay alive, fed and find loads of dropped money suitcases, all while trying to figure out if they should share or not.  And it’s getting pretty testy.

What happens on the next Treasure Island?

The clip below opens with the group on the beach watching as a helicopter circles the island.

They all know what it means, that more money is being dropped for them to claim as theirs.

We have already determined that several people—namely Ivar, Marco and Emily—are not the “sharing is caring” sorts of people.

More altruistic are Jack, Ben and Cat who are in it to evenly distribute—especially with Morag and Irene—as both of these older women are working hard to keep everyone fed. They are at a physical disadvantage than the younger men who go off running and have more stamina for the jungle.

We watch as Jack and Ben furiously row towards the spot across the inlet where the money dropped as Marco has run through the brush and is now swimming across the same body of water to get to that money first.

In a prior interview, Marco laid his cards on the table about sharing the money.

Absolutely not. I’ve come from a working class background, I’ve worked my ass off in the marines for the past 6 and half years and I wanted to go and get the money for myself. All I had in my head is what that money would do for me and my family. When I found out it was £100,000 this is life changing money. To have this opportunity to put some cash in the bank is a fantastic thing. The thought of sharing it on the island with people I didn’t know baffled me. I don’t understand why anyone wanted to do that.

Bear Grylls on the new series

Do the right or kind thing or keep the loot all to yourself?

“This radical new twist on the island experience will test whether human nature really is ruled by the quest for financial gain, or whether co-operation and altruism in the face of adversity can bring their own reward,” Grylls said in a press statement to TV Shows Ace.

If a competitor taps out early, they leave with no money.  They must survive the elements that “Treasure Island” throws at them – including extreme temperatures, storms,  thirst and hunger.

The mental and physical tolls and conditions these contestants endure test their limits. People unravel under pressure.

The executives behind the series