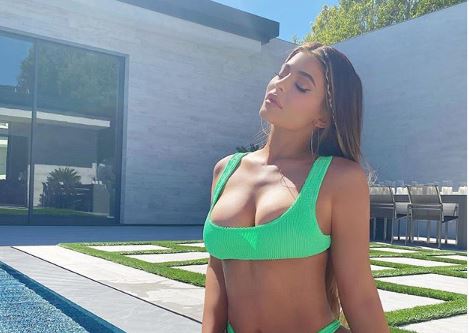 Kylie Jenner of Keeping Up With the Kardashians just got a new tiny tattoo. People shared the details about what she got. This one is a tribute to her sweet daughter Stormi Webster. It doesn’t look like she was ready to show everyone the tattoo and details, but it was shown on her Instagram Story.

All about Kylie Jenner’s tattoo

Kylie Jenner’s new tattoo is very simple. It says “4:43” and is on her forearm. Viewers got the chance to see it on her Instagram Story. It was just a glimpse of the tattoo, though. So far, Kylie hasn’t said a word about the tattoo to her followers. Everyone would love to hear why she decided to get this one done.

So what does this mean? Well, 4:43 is the time that her daughter Stormi Webster was born. It is a very sweet tattoo, but if Kylie ends up having several children she will have a lot more to add at some point.

Kylie Jenner has shared other tattoos in the past. This isn’t the only one she has, but Page Six was able to come up with a list of all of them. She has her daughter’s name Stormi on the back of her arm. At one time, she had a matching tattoo with Jordyn Woods on her finger, but that one may have been changed now that they aren’t friends.

At one time, Kylie had one with Tyga, but she changed it to say la for LA. She also has her grandma’s name on her and a butterfly that is for Travis Scott’s music. Sanity and a red heart are her other ones. All of her tattoos are very small.

What has Kylie been up to?

It looks like Kylie Jenner is staying pretty busy. She recently was at Kylie Cosmetics HQ doing a photo shoot. Luckily, she shared some of the pictures of what was going on with her fans. Kylie also recently colored her hair once again to make it a bit lighter.

She also recently shared that she was hoping to drop a few pounds. Just like everyone else Kylie has been staying at home due to COVID-19. A lot of people ended up putting on a few pounds while they were at home. Jenner posted a throwback photo along with the caption “ok cutting off these quarantine pounds starting tomorrow.” The sisters have been working out together which does make it a bit more motivating.

Don’t miss new episodes of Keeping Up With the Kardashians when they return to E!.