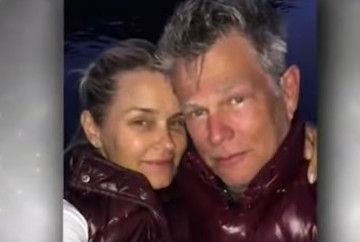 If there’s one thing The Real Housewives of Beverly Hills fans can agree on, it’s that Yolanda Hadid deserved better. Better than her ex-husband David Foster. In his time appearing alongside his ex, David was dismissive and downright rude to Yolanda and her co-stars. Who can forget the time he shushed Taylor Armstrong and Kyle Richards for singing when he was playing piano?

Still, fans were surprised when he filed for divorce in 2015 after just four years of marriage. The split came while Yolanda was battling Lyme disease. She’s often said that he left because he couldn’t handle her illness. However, he denies that was the reason.

Netflix is airing a new documentary about David’s long career. David Foster: Off the Record explores not just his professional career, but his personal life. The esteemed pianist has four ex-wives and is currently wed to American Idol’s Katharine McPhee.

During the doc, David says that Yolanda’s illness “is not the reason” he left. However, he “will never disclose” the real reason. He strongly implies that he didn’t like being on RHOBH. He does note, however, that it wasn’t his first foray into reality TV.

David appeared on Princes of Malibu with stepsons Brandon and Brody Jenner. Yes, from the Jenner/Kardashian family. He did the show partly because he didn’t see it affecting his music career. David says,

“[The show] was stupid, but I thought my career is so cemented in quality and success that I was impervious to anything hurting me. Is Stevie Wonder not going to work with me because he saw me on Princes of Malibu? No. So all is good there.”

However, RHOBH was “a different story.” He only did the show for Yolanda and he “didn’t want to be the guy to say no.”

Music Icon Hates That Fans Recognize Him From RHOBH

In general, David seems peeved that fans recognize him from reality TV more than from his long music career. David says as much in the documentary. He says, “Probably more people know me from reality TV and from being married a lot of times than for my actual music.”

He gives an example of interactions with fans. “I would still get, ‘I know you, you’re on The Real Housewives of Beverly Hills.’ And what I want to say is, ‘Hey, I got 16 f**king Grammys, OK? I’ve sold half a billion records. F**k that show.’”

Now that David is off RHOBH, he’s focusing on making music again. During the coronavirus quarantine, he did weekly Instagram Live performances with Katharine McPhee, his fifth wife.

Katharine and David originally met during her appearance on American Idol in 2006. They stayed friends even after the show. They eventually began dating after his split from Yolanda.

The new couple wed in England in 2019. They recently celebrated their one-year anniversary. He opened up to Us Weekly about his new marriage. Of Katharine, he says, “She’s opinionated, super-talented.” and has”a lot to say.” Which he calls ”challenging, but in the best way possible.”

A year ago today I married the love of my life. Thank you for always loving me and inspiring me in all aspects of my life. I love you. Here’s to the future! (Oh and happy anniversary to the other love of my life – this dreamy dress! 😂💕 thank you @ZacPosen!!)

Fans can watch David Foster: Off the Record on Netflix starting Wednesday, July 1.