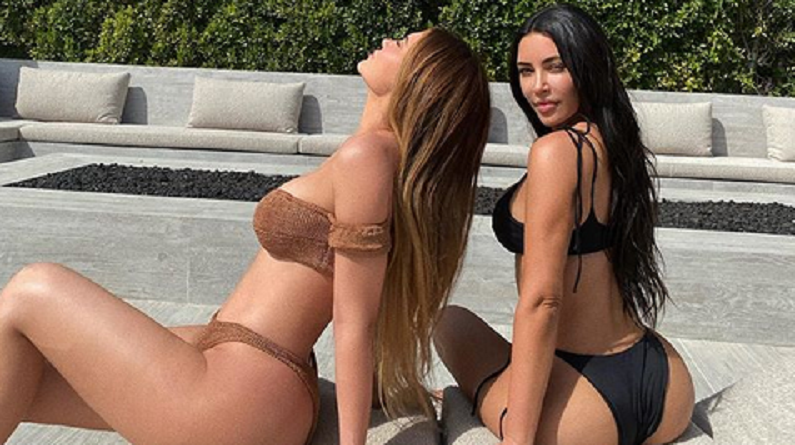 Earlier this month, Kylie Jenner lost her billionaire status. Her older sister, Kim Kardashian, just became one overnight. Her husband Kanye West showed his support. He’s proud of all that she accomplished.

Back in January, Kim purchased Kylie’s beauty business, Coty, as per CNN. On Monday, June 29, the company announced that it acquired a 20 percent stake in KKW. The deal values at $1 billion, which is slightly less than the $1.2 billion of Kylie’s company, Kylie Cosmetics. While Kylie lost her billionaire status, Kim immediately became one thanks to this cool deal.

NOW AVAILABLE: our @skims smoothest collection yet — soft and smooth Summer basics made to be worn both indoors and out. Available in 3 colors and in sizes XXS – 4X, shop now at SKIMS.COM and enjoy free shipping on domestic orders over $75.

Kylie Jenner is no longer the billionaire in the family. Kim Kardashian just became a billionaire overnight. The 43-year-old rapper wrote a bizarre message to the Keeping Up With the Kardashians star on Monday after the news broke, as per People.

“I am so proud of my beautiful wife Kim Kardashian West for officially becoming a billionaire,” Kanye tweeted. “You’ve weathered the craziest storms and now God is shining on you and our family.”

In his emotional tribute, Kanye also shared a photo of fresh fruit and flowers laying out in the sun.

“So blessed this is still life,” he captioned the picture. “So I made you this still life. We love you very much.”

We love you so much pic.twitter.com/Vvtgzodnah

This is a blow to Kylie Jenner and her business. Kim’s partnership with Coty expanded her KKW Beauty brand into other categories, including hair care, nail care products, personal care products, and skincare. This will also introduce the lines into global markets, according to a press release. This means that Kim and her team will lead the creative efforts of both communication and product initiatives. Kim also released a statement about the exciting news.

“Partnering with an established organization like Coty will be instrumental in the advancement of my brands as their global reach allows for faster expansion so people around the world are able to experience new launches first hand,” Kim said in the statement. “This relationship will allow me to focus on the creative elements that I’m so passionate about while benefitting from the incredible resources of Coty, and launching my products around the world.”

The reality star’s decision to sell a part of her company comes after Kylie Jenner, who sold a 51 percent stake of Kylie Cosmetics for $600 million in November 2019. Kylie’s company previously valued at $1.2 billion and according to Forbes, gave her a net worth of under $900 million.

However, Forbes stripped her of her billionaire status. Now, it looks like Kim Kardashian has surpassed her little sister’s net worth and has the figures to back it up. Ever since 2018, Kylie Jenner received the title of “youngest self-made billionaire on the planet.” Though the “self-made” aspect of the title was heavily debated on social media. Due to the success of her Kylie Cosmetics and Kylie Skin, no one questioned her net worth.

got all dressed last night with nowhere to go. i hope everyone is staying busy & safe 🖤🖤🦋

Last month, Forbes published a shocking report about Kylie’s net worth. The investigative piece titled, “Inside Kylie Jenner’s Web Of Lies – And Why She’s No Longer a Billionaire.” The report claimed that Kylie and her mother, Kris Jenner, fabricated their tax documents and lied about the success of Kylie Cosmetics. Forbes revealed that Kylie’s net worth is just under $900 million, which is still close to billionaire status.

Kylie Jenner keeps getting knocked around. She’s no longer the highest-earning celebrity on Instagram. The social media platform released its annual Instagram rich list and the starlet is no longer on it, per The Mirror. The 22-year-old lost the top spot to Dwayne “The Rock” Johnson, who has over 188 million followers on the platform. The Fast and Furious actor has made over $1 million for his content.

can you guess my favorite color

Meanwhile, the amount that Kylie makes has decreased by 22 percent over the past year. It’s the first time in four years that neither a Kardashian nor a Jenner topped the list.

What are your thoughts on Kim Kardashian becoming a billionaire shortly after Kylie Jenner lost her status? Sound off below in the comments section.