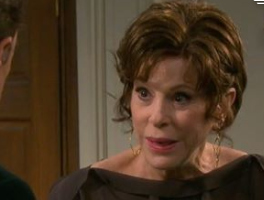 June may be ending, but the drama on Days of Our Lives isn’t. Eli (Lamon Archey) and Lani’s (Sal Stowers) wedding continues throughout the week. Their first wedding may have been a bust, but the couple are determined to tie the knot this time. But a few Salemites may have something to say about that.

Gabi Interrupts Lani and Eli’s Wedding, But Not For The Reason You Expect

Especially after Eli and Lani recently rescued Gabi after she was kidnapped by goons. Spoilers indicate that Gabi wants to offer her former flame (Eli) and nemesis (Lani) her well wishes.

However, the other wedding crasher isn’t there to offer hers.

Vivian Crashes Lani’s Wedding With a Gun On DOOL

Earlier this year it was reported that soap icon Louise Sorel was making her way back to her role as Vivian Alamain on DOOL. Soap vet Robin Stasser briefly took over the role last year and was playing Vivian when she shot and “killed” her own son, Stefan.

Vivian hightailed it out of town after the shooting. But this week she returns at Lani’s wedding. And she has a gun. Lani pleads not only for her own life, but for the life of her baby as well.

Lani and Eli do eventually get married, despite Gabi and Vivian’s interruptions.

‘Jake’ Gets Results of His DNA Tests, Seeks Out Vivian For Answers

Vivian ends up in lockup due to her threatening Lani with a gun. ‘Jake’ and Gabi finally get the results of his DNA test. Whatever the test shows, he seeks out Vivian at the police station for answers.

Is he Stefan, a twin or just Jake? Tune in to DOOL this week for the DNA results.

DOOL’s Allie Choose Who Will Adopt Her Baby

Last week Allie (Lindsay Arnold) told Lucas (Bryan Datillo) that she’s giving her baby up for adoption. To someone in Salem. We speculated that Will (Chandler Massey) and Sonny (Freddie Smith) would be the lucky parents.

However, spoilers say that Allie chooses her former step-dad, Rafe (Galen Gerig,) to adopt her baby. Eric (Greg Vaughan) has to break the news to Will and Sonny. Allie doesn’t go into labor until later this summer, so there’s always a chance that she changes her mind.

Tell us in the comments your thoughts on Louise Sorel returning as Vivian.