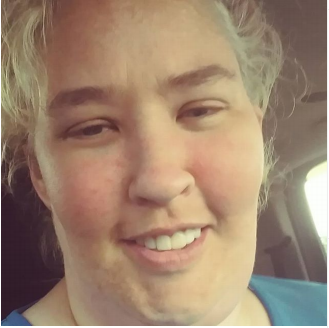 On June 26th episode of Mama June: Family Crisis, Mama June Shannon and Gene Clark head to rehab, reports InTouch Weekly. In the teaser clip for the WeTV show, June gives insight into how bad things are. June reveals that the couple is “lucky to be alive.” Additionally, June admits that she and Geno are “lucky to be alive.” Sadly, during the course of six months, the pair allegedly spent $150K on cocaine.

Sadly this news comes just a week after CNN reports that Shannon allegedly spends $2,500 a week on meth. It was during this episode that Mama June admits that she sold the house because she is broke. In Friday’s episode, June says, “It got to the point where being able to afford a hotel and being able to live just was not possible, so we started sleeping in the Suburban.”

Luckily for Honey Boo Boo (Alana), her older sister, Lauryn Shannon steps up to take care of her. Unfortunately, Lauryn admits this is isn’t June’s first run-in with drugs as Mama June discusses drugs with her daughter. “It’s been the first time since we’ve been older that you’ve ever been strung out,” Lauryn points out to her mother.

Terrifyingly, the couple admits that they went through “a couple ounces day” and “an 8-ball an hour.” Additionally, it comes to light that when they were clean, it was because they “didn’t have the money.”

Does the couple finally get help?

It is unclear what finally motivates the couple to seek help, but Mama June repeatedly says that she “wants to do better for her daughters.” Sadly, while in court on May 8th, Lauryn and Alana weren’t ready to see their mom. Expectedly, Lauryn is back and forth about her mother. InTouch Weekly reports that she “wanted to give her mom ‘another chance’ despite all their past drama.”

Ultimately, once the family came face to face, things did not go as expected. Unfortunately, due to an alleged skewed drug test, Mama June’s drug test results came back positive for cocaine. Once that was all settled, Lauryn agreed to let Mama June reunite with the family. Of course, there were stipulations. June agrees to get a new phone, stay clean, and start going to rehab.

How is Lauryn handling everything?

Heartwarmingly, Mike “Sugar Bear” Thompson’s wife acknowledges the significant responsibility on Lauryn. In addition to providing for her sister, 14, Lauryn has an almost-two-year-old. Jennifer Thompson says, “It takes a lot for a 20-year-old to say, ‘I’m going to be able to do this.'” However, this is contradictory to what actually happens when cameras are rolling. In an episode of Family in Crisis, Sugar Bear and Jennifer invite Lauryn and Alana over. It is at this time, they tell the girls they bought a home with a room for Alana. Jennifer accuses Lauryn and Josh of  “being unfit parents after they had to live in hotels over Mama June’s drama,” reports DailyMail.

Things in this family are ever-evolving. Only time will tell how Mama June and Geno in the road to recovery. Keep it tuned to TV Shows Ace for more Mama June: Family Crisis and other television news.

Courtney Waldrop Rushes Rawlings To Hospital, Leaves In A Cast
Love In The Afternoon With Hallmark’s ‘A Little Daytime Drama’
‘B&B’ Spoilers: Eric Forrester Does The Unthinkable – Proves He Is DONE!
OH NO!!! Jessa & Ben Seewald Are Hurting For Money After Giving Birth?!
Khloe Kardashian’s Friends Reveal Why Khloe ‘Can’t Let Go’ Of Tristan Thompson