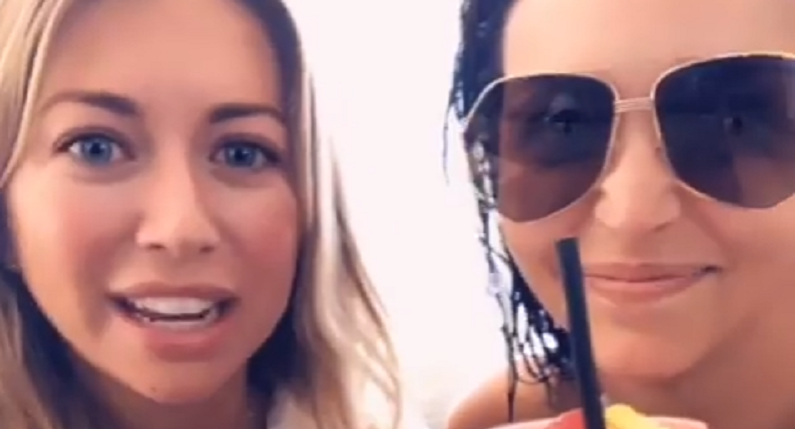 Scheana Shay and Stassi Schroeder are much closer than fans think. The Vanderpump Rules co-stars hung out on Season 8, which was revealed in the Secret’s Revealed special. Scheana also said that the former VPR star was “there” for her after her miscarriage.

It seems like an unlikely pairing. Scheana Shay and Stassi Schroeder feuded many times on the Bravo show. The 35-year-old revealed that she’s on Stassi’s side following the Pump Rules firing. As previously reported, Bravo fired Stassi Schroeder and Scheana Shay after a racially insensitive incident. Their former co-star Faith Stowers accused them of racially profiling her for a crime she did not commit.

Although Scheana has remained silent on the firing, she revealed where she stands with Stassi in her latest Instagram post.

Vanderpump Rules star Scheana Shay revealed she’s still good friends with Stassi Schroeder after her firing. As TV Shows Ace reported, Bravo fired both Stassi and Kristen Doute for their past racist remarks. Scheana Shay took to her Instagram to show some support for Stassi. In a new post on her Instagram Stories, she gave a shoutout to the “Birthday Queen” on her 32nd birthday, per The Blast.

The SUR waitress shared a throwback photo of the two on Wednesday, June 24. Vanderpump Rules fans know the two weren’t always close. Stassi was often mean to Scheana during Season 1 of the reality series. It continued in Season 3 when Stassi returned from New York City. That’s when she mouthed the infamous line: “I’m not sure what I’ve done to you, but I’ll take a pinot grigio.”

who’s ready for season 8!? hope to see you all at bravocon this weekend 🖤 #PumpRules is back Jan.7th!!

Scheana Shay revealed they’re good friends now. In the throwback post, Scheana wished Stassi a happy birthday. In the photo, both girls wear glamorous dresses on the red carpet. Scheana added a birthday crown to Stassi’s head and tagged her. While it was a simple message, it’s clear that the two are now friends.

Scheana Shay had kind words to say about Stassi Schroeder on her “Shenanigans” podcast. She revealed that she found out she was pregnant with her and her boyfriend Brock Davies’ first child together.

“The morning [after bleeding], I wake up and I see all over the internet that Stassi’s pregnant and I’m like, ‘Oh, my God, we’re pregnant together,'” Scheana exclaimed, per Us Weekly. “‘I wonder how far along she is.’ She announced so early. I’m like, ‘I swear we were all drinking when we filmed the reunion, maybe she had a mocktail? I don’t know.'”

Scheana reached out to Stassi and congratulated her and her fiancé, Beau Clark. But she “didn’t say anything” about her pregnancy. Shortly after, Scheana started bleeding and she was understandably concerned.

happy birthday baby!! 🥳 9 months later and already so many memories. i can’t wait to see what life has in store for us. thank you for bringing my spark back and making me feel loved every single day! i love you to the moon honey! #dirty30 🥰

“Not only did I start bleeding the night before and I’m worried about having a miscarriage, but it’s too early,” she explained. “I wasn’t really telling anyone other than my two best friends, my mom, my sister and obviously, Brock.”

Scheana’s blood work revealed she had low progesterone levels. She then scheduled an appointment with her OB and found out “there was no heartbeat” or growth. Scheana found herself “at home just waiting to naturally miscarry.” She also addressed the firings.

While “everything … has been really messed up lately” among the Vanderpump Rules cast, she thanked her co-stars for being there for her. Not only Stassi but also Ariana Madix and Brittany Cartwright.

What do you think of Scheana Shay and Stassi Schroeder being friends? Sound off below in the comments section.