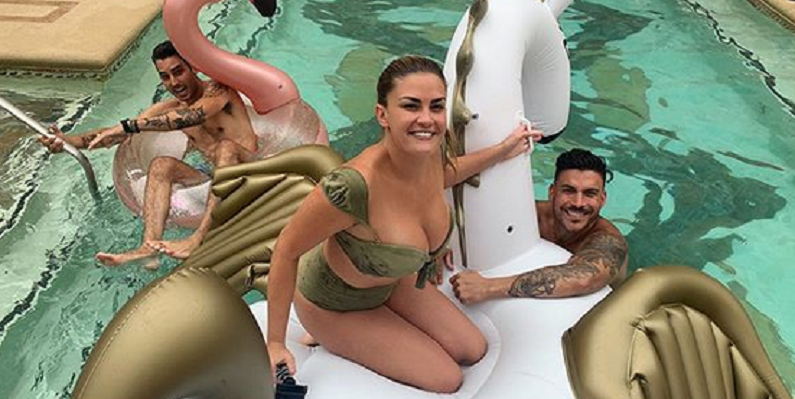 Brittany Cartwright made up with Ariana Madix. The two went head-to-head during the explosive Vanderpump Rules Season 8 virtual reunion. She celebrated Ariana’s special day on social media. Earlier this month, viewers watched Brittany defend her husband Jax Taylor’s behavior towards his castmates. In the meantime, Ariana mocked his character.

Jax and Brittany mostly feuded with Ariana and her boyfriend, Tom Sandoval. Ariana even made fun of Jax’s mental health as Sandoval slammed his relationship with his mother. Needless to say, it didn’t turn out well.

It appears that Brittany and Ariana have since made up. She took to social media to wish Ariana and Stassi Schroeder a happy birthday. As VPR fans know, the ladies share a birthday.

Brittany Cartwright made up with Ariana Madix after the virtual reunion

Per The Blast, Brittany Cartwright took to Instagram to wish Ariana Madix a happy birthday on Wednesday, June 24. The Pump Rules star turned 35. This comes after fans called the network to give Brittany and Jax the boot. The reality star is also dealing with her mom, who spent days in ICU following a surgery that went wrong.

“Happy Birthday to my little blonde beauties!” Brittany wrote. “I love and miss you both!”

She then followed up with a post made exclusively for Ariana. She posted a photo of her and Ariana laughing on the show. In the caption, Brittany wrote, “Happy Birthday!” while tagging Ariana’s name and including two heart emojis and a birthday crown.

Vanderpump Rules star has a special message for Stassi Schroeder

Brittany Cartwright also revealed that she can’t wait to shower Stassi’s baby with gifts, as per The Blast. This comes after Stassi Schroeder and her fiancé Beau Clark announced that they’re having a girl. The 31-year-old took to social media to wish the former VPR star a happy birthday. This comes after Stassi and Kristen Doute lost their gigs on the Bravo series over a racial incident involving former co-star Faith Stowers.

Just days later, Stassi announced she’s pregnant with her first child. On her Instagram Stories, Brittany shared more photos of herself with Stassi. In one of the photos, Brittany and Stassi wore matching white outfits. They looked happy in the throwback post.

In another photo, Brittany playfully placed a tiara on Stassi’s head. She wrote, “Happy Birthday!!! I can’t wait to spoil your baby girl.” Earlier this week, Beau and Stassi revealed that they’re having a baby girl. The former “Straight Up with Stassi” podcast host smiled while wearing a pink dress and showing off her ever-growing baby bump.

And the happy occasions commence. As TV Shows Ace previously reported, the mom-to-be celebrated her birthday with her ex-castmates Kristen Doute, Jax Taylor, Katie Maloney, and Tom Schwartz at home on Wednesday. Brittany was not in attendance as she’s been in Kentucky with her mom.