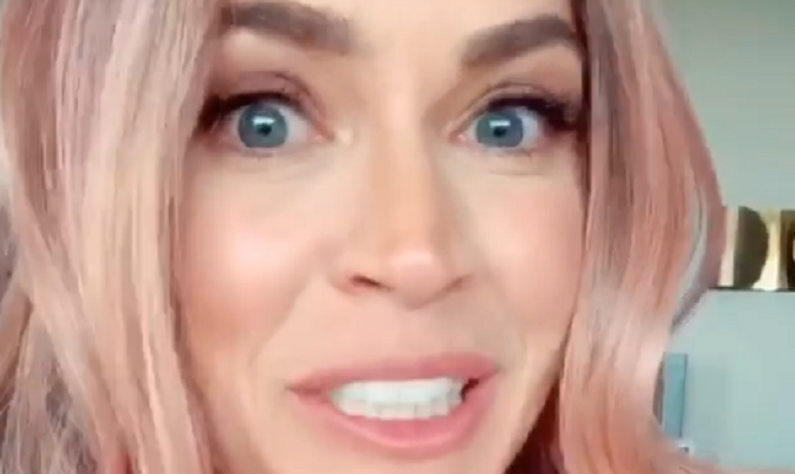 Teddi Mellencamp gave her followers another postpartum update. She revealed how much her journey has changed since giving birth four months ago. Read on to learn what the Real Housewives of Beverly Hills star has been up to.

Teddi Mellencamp wants to be honest about her postpartum journey. This comes four months after she gave birth to her third child. However, keep in mind that everyone’s journey is different. And Teddi makes that clear in her latest Instagram post.

“Many of you are asking for a postpartum update, but because every person’s journey is different, I have been hesitant as to not project expectations,” the Real Housewives of Beverly Hills star wrote on Instagram. “Baby Dove has been drastically different than Slate and Cruz. At 4 months, she’s sleeping through the night and we are in a rhythm (after the first three months of highs and lows; phew were there some lows).”

Teddi added that her “commitment to taking care of my health and wellness” was beneficial in part of her recovery. The Bravo celebrity then revealed what she’s been doing to stay on track, as per Us Weekly. Teddi credits clean eating and a daily routine that makes her feel better and more productive.

My Day 3 postpartum reality: It is unbelievable, unconditional love. It is an incredibly powerful bond that Dove and I share. It is tears of joy watching Edwin light up when he’s with her. It is bursting with pride watching my older kids gently, lovingly & eagerly jump into their new found big sibling roles. It is very little sleep because, let’s be real, is “sleep when the baby is sleeping” actually a thing? It is knowing that feeling delirious will be the new norm for a while. It is humbling, to say the least – switching from the mesh “mom diaper” with ice from the hospital to high waisted compression panties at home. It is drinking way too much prune juice with crushed ice because you are anxiously awaiting the first post-baby 💩. It is embracing and loving this body of mine. It is lots of laughs when Cruz asks why my stomach hasn’t deflated. It is a flood of emotions when multiple lactation specialists tell you that only your right breast is able to breast feed the baby due to scarring on the left. It is trying to calm your mind when you are continuously running all the hypotheticals of every scenario in your head. It is a constant reminder to live in the moment and feel all the highs and lows that a new baby brings. It is the simultaneous notion of wanting to slow down while still feeling the need to rearrange and organize the entire house. It is doing your best to not compare your journey to anyone else’s. It is overwhelming gratitude for each friend and family member who shows up without judgement, only to bring you love & food. It is a constant roller coaster & I wouldn’t change it for the world. My baby girl is here and I love her more than words can say. We each have our own journey and this is mine 💕🕊 #postpartum #inlovewithdove

“I do not share my weight, but since it’s my most-asked question, I will say that I am 9lbs away from where I was before I had Baby Dove,” the 38-year-old revealed in the lengthy caption.

The fitness trainer said she doesn’t follow the latest fad diet or workout craze. She would rather do things she enjoys, like taking a walk with her kids or riding on her Peloton bike. Teddi reinstated that “each journey is different.” She also said that she wants to share her experience to “serve as an inspiration” to other moms who are going through the same thing.

The RHOBH star previously talked about her journey on social media. Back in February, Teddi welcomed her daughter Dove with husband Edwin Arroyave. The couple is also the proud parents of Slate, 7, and son Cruz, 5. Before giving birth, Teddi dealt with fertility struggles and underwent in vitro fertilization to conceive her first two children. However, her third pregnancy came as a “complete surprise.”

Three days after giving birth, the reality star gave her followers an update, as per People. She shared a photo of herself in just a black bra and matching underwear. She documented her “Day 3 postpartum reality” in the caption.

I’m no fortune teller but the day you’re arriving is very soon. The day you’ll be embarrassed of this pic is also in your future. 💕 👶 📷 @makeupbyhaileyhoff #babyarroyave

“It is an incredibly powerful bond that Dove and I share,” Teddi wrote in the emotional post. “It is tears of joy watching [husband Edwin Arroyave] light up when he’s with her.”

In her Instagram post, Teddi revealed that she gets “very little sleep.” She’s experienced the highs and lows, but she wouldn’t change it all. Instead of drinking Aperol, she finds herself “drinking way too much prune juice with crushed ice.” Teddi’s enjoying the journey, which is filled with “lots of laughs.”