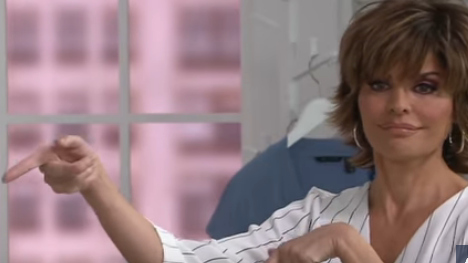 The Real Housewives of Beverly Hills star Lisa Rinna changed her mind. A day after saying QVC is ‘muzzling’ her, the actress says she won’t give in to the ‘Karens’ who think she should shut up.

On Wednesday, June 24, Lisa posted to her Instagram Stories to let her fans know that QVC is trying to silence her. She wrote that ‘Karen’s [sic] were threatening to quit buying her clothes from the shopping network if she kept speaking out about politics. Additionally, some of them demanded QVC fire her for her outspoken political views.

Mind you, Lisa didn’t express any of these opinions on air. Rather, fans saw them on Lisa’s social media and took issue. In fact, Lisa says she was told to stop “using [her] platform” to talk about politics.

At the time, Lisa told her followers that she had agreed to QVC’s demands, citing the need to support her family. However, she added a second Instagram Story saying that she was on the “right side of history.”

Despite the threat to her family’s financial stability, the RHOBH star decided that some things are worth standing up for. She put up a new Instagram Stories post on June 25 saying that she’s changing her mind.

Or, more bluntly, that she “decided not to shut up. Ever.” People reports that the post also had stickers that said “Black Lives Matter” and “Vote.” The outlet also reports that Lisa told fans she would “take whatever consequences” that came her way.

Furthermore, she has a message for the ‘Karens’: “f**k off.”

In case fans – and ‘Karens’ – didn’t get the message from her Instagram Stories, Lisa made sure her beliefs are clear. She posted an art piece from @industry.27 of a series of different colored hearts.

The first all-black heart had “Black Lives Matter” written below it. A rainbow-colored heart says, “Love is Love.” A heart with blue and green images of the earth touts “Science is Real.” Other hearts include the sayings, “Women Are Equal,” “Humans Are Not Illegal,” and “Kindness is Everything.”

While Lisa received many supportive comments, including from her RHOBH co-star Sutton Stracke, some fans took issue. The ‘Karens’ in the comments clapped back with “Blue Lives Matter” and “All Lives Matter,” though Lisa’s post didn’t never said they didn’t.

QVC has yet to respond to the controversy in any way. It remains unclear if Lisa will, indeed, face consequences for making the issue public.

However, any real RHOBH fan cannot be surprised by Lisa’s defiance. She is very outspoken on the show and she will continue to be. Fans are confused why the show is off the air until early July. However, Andy Cohen says it has to do with the coronavirus making editing slow-going.

The Real Housewives of Beverly Hills returns to Bravo on Wednesday, July 8. Tell us in the comments if you think Lisa should follow QVC’s demand to pipe down or continue to speak her mind.