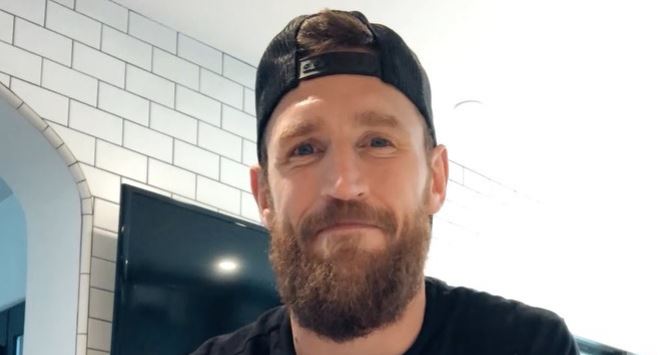 Brooks Laich and Julianne Hough may have announced their split in May, but rumors were swirling before that. According to sources Brooks, “didn’t want a divorce” from Julianne Hough. “He felt as though he didn’t have a choice.” Julianne’s behavior really didn’t give Laich a choice on staying together. The former hockey player felt that Julianne, “pushed him towards a divorce because of the way she was acting.”

Brooks is not the one struggling with the split like Hough is though. “Hough’s friends think Brooks is an amazing, strapping dude. They aren’t sure why she let him go or messed it up,” an insider added. However, Brooks Laich is not moving on so quickly. “Brooks doesn’t have a special someone in his life right now romantically speaking,” according to sources.

With months of speculation the cute couple finally made their announcement they were ending their three year marriage. “We have lovingly and carefully taken the time we have needed to arrive at our decision to separate.” “We share an abundance of love and respect for one another and will continue to lead with our hearts from that place. We kindly request your compassion and respect for our privacy moving forward.”

Sources said, the parting of ways “was a long time coming.” “The two would argue and just had different viewpoints on important issues.” Brooks Laich and Julianne Hough were focusing on, “trying to find themselves separate from one another. Therefore, just to deal with any major issues they faced while married.”

How Are The Two Moving On?

US Weekly sources are saying Julianne is “not doing great right now,” and “is really upset,” with the split. which is surprising. Because, in April sources said, “she spent a lot of time with Ben Barnes and leaning on him for support.” “She told Brooks that it was nothing, but it’s not. This was before the announcement of their split in May.

Brooks Laich was recently out and about in Los Angeles with friends. The former hockey player wasn’t wearing his wedding band. Brooks Laich recently celebrated his birthday with Julianne’s brother Derek Hough and the Dancing With the Stars alum girlfriend Hayley Erbert. The three of them and some more pals exercised together in a series of Instagram Story videos. In which Derek dubbed it “Brooks birthday blast workout.”

As far back as January the rumors started about Julianne and Brooks having marital issues. Brooks was hopeful the two of them could work out their differences. Instead of going separate ways. Julianne sounds like she may be having regrets. Who knows what their future holds, maybe they will work things out like Brooks wanted. What do you think? Please comment below.