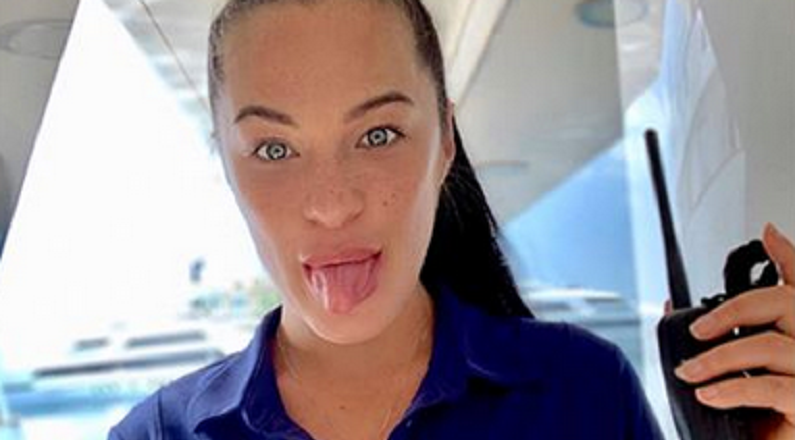 Below Deck Med star Jessica More shared her experience with filming aboard The Wellington. In an exclusive interview with In Touch Weekly, she revealed the behind-the-scenes secrets to filming a reality show. It was an adjustment for the third stew.

The Bravo series made history during Season 5. The crew filmed on the largest yacht ever. Also, the history-making season has three women leading department teams. However, filming on the yacht has become a challenge, even for the newbies. Jessica More shared her experience with filming on the luxury liner.

In an exclusive interview with In Touch Weekly, Below Deck Med star Jessica More shared some of the behind-the-scenes secrets. She wasn’t used to being on a reality show. She was used to yachting without being on TV.

“I just know there’s cameras everywhere,” she admitted. Everywhere she turned, there was a camera in her face.

“There’s zero privacy unless you’re going to the restroom,” Jessica said. Since the cameras are already rolling, there’s no excuse for slacking off. Having cameras everywhere motivated Jessica to do her best.

While the crew gets an “hour or two [hour] break,” in which they could be “lucky enough” to fall asleep, it’s still never long enough. Jessica feels as if she’s “running off of adrenaline” most of the time. Life as a yachtie is not what she expected. It’s also not something that you can mentally prepare yourself for.

“I had the experience. I had been doing yachting for like three years but it’s one of those where you can never be prepared in time for a charter in 24 hours, whatever that time span is,” Jessica explained. “So you just got to do what you got to do.”

While it’s stressful to film on The Wellington, it’s not that different from chartering on other mega-yachts. Jessica admitted that she likes the “work hard play hard” routine.

“If you think about the other Bravo shows, they film in a massive mansion or big restaurants or the beach,” Hannah said. “And we’re in these tiny confined spaces. And they have very big equipment. So it makes it difficult like that.”

Hey guys!! Get ready for an episode of me being super clucky with 2 of the cutest little boys onboard – tonight 9pm on @bravotv #belowdeckmed

There are also strict rules on filming compared to the other Bravo shows. For example, the staff can’t communicate with the crew while the cameras are rolling. While Hannah “hated the fourth wall,” she learned to “understand it and respect it.” While Hannah has been part of the franchise longer than Jessica, she still has a hard time getting used to having cameras around.