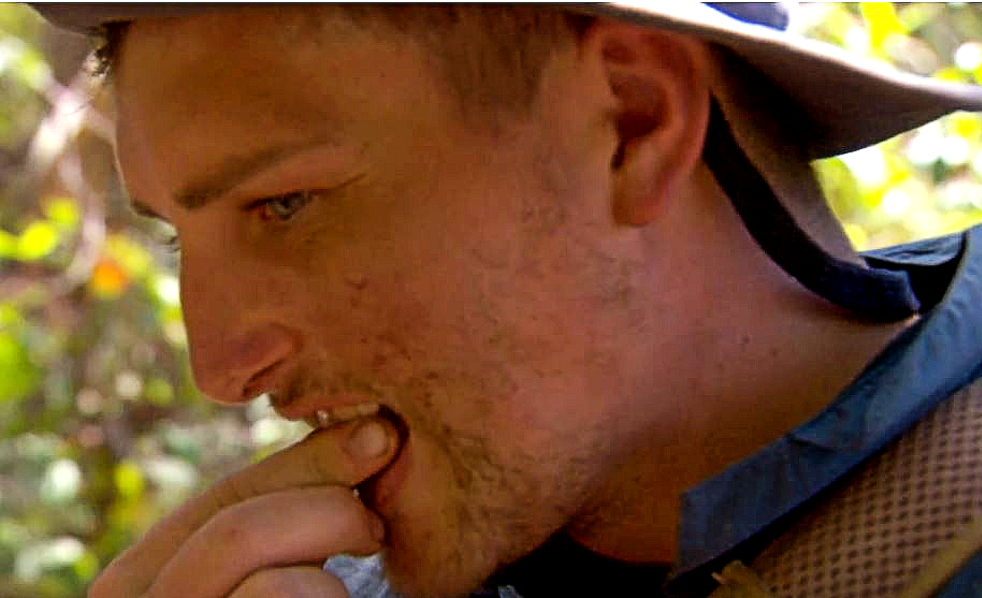 On tonight’s Treasure Island with Bear Grylls for Discovery, a big dinner is hopefully the plan. But as the hungry group looking for both food and money have a look around, it’s clear they are in deep sh*t Arkansas with regards to viable protein, so it seems.

TV Shows Ace has an exclusive preview that shows them hot, cranky and meandering about in the jungle looking for money and food.

One of the Treasure Island twelve contestants, Ben Kandel, investigates what looks to be goat poop droppings, as a bemused Cat Lewis calls the attention of elder cast members Irene Cattanach and Morag Barson to check him out.

They all figure, where there’s goat poop, there are goats, and dinner time bells are clanging loud and clear.  We wonder what host and narrator Bear Grylls will make of this scatalogical discovery.

On the new Treasure Island with Bear Grylls, it’s pirate booty time as Bear Grylls, an esteemed adventurer, oversees this new Discovery series.  There are twelve lucky contestants in a wide age range who are dropped on an island, marooned and all searching for the same treasure.

Will it be a friendly competition or will it devolve into a sick Lord of The Flies situation where leaders emerge, and the weak are eaten alive?

The premise of Bear Grylls new series Treasure Island is about tenacity and hanging tough despite the odds, and the unlikely things people do to grab that money.

Host Bear Grylls will observe human nature up close as these strangers are marooned together on a deserted island boasting a hidden cash prize for the lucky finder.

What do contestants Morag Barson and Irene Cattanach have in common?

They are the oldest members of the twelve, and they both have wicked senses of humor.

Case in point: The big goat ruse you that will see tonight.

Joining them are Mano Shan, Cat Lewis, Jack Tyrimos and Ben Kandel.  Jack is only 24 and is a plumber while 27-year-old Ben is expecting a baby with his wife and works as a salesman in Manchester.

It is Ben who eats the discovered poop and a starving Jack who is sent on a wild goose chase in the thick brush responding the goat calls he hears that sound real.

Except they are not.

Pulling one over on Jack is prankster Morag who does a damn fine goat call.

And for Irene? The 75-year-old runs an AirBnB in Scotland.

She is the oldest contestant to be cast on The Island. Fun fact: She lives with her husband, Euan and they have six grandchildren and two great-grandchildren. No slacker, Irene is a  world silver medallist for her jams and marmalades.

She’s delightful in this exclusive preview too: