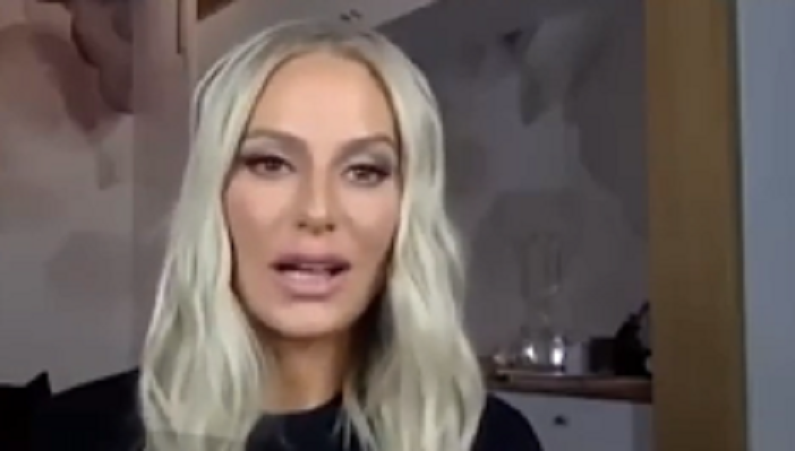 Dorit Kemsley caused a stir on social media once again. This time, she caused the plastic surgery rumors to swirl when she posted new photos on Instagram. Many RHOBH fans claim that she got a “new face.”

The Real Housewives of Beverly Hills star just wanted to announce her new partnership with K-Swiss. However, the focus wasn’t on what she was wearing. Fans wanted to know if she went under the knife.

The 43-year-old reality star modeled the line’s Pride collection. She had no idea that her comments section would fill up with questions about her “new face.”

Per The Blast, Dorit Kemsley took to Instagram to share two new photos. Sitting on a gray chair, the blonde bombshell wore a navy blue and white bikini top underneath a bright blue jacket and shorts. Dorit paired her look with rainbow-colored K-Swiss trainers.

“Join me and @kSwiss in supporting #LGBTQPRIDE with ALL,” Dorit captioned the sizzling new photos. “NOH8 a representation of the positive message taken with every bold step. I wear these sneakers in recognition of the impact of the LGBTQ people have had in this world.”

She ended the caption with the hashtag “Love Is Love.” Dorit also said that K-Swiss will also donate “a portion of sales directly to the NOH8 Campaign as they continue their mission to promote LGBTQ marriage, gender, and human equality.”

However, RHOBH fans weren’t focused on the supportive message. Many fans took to Dorit’s Instagram post to question about her “new face.” Many of them exclaimed that she looks unrecognizable in the photos. They wonder if she got work done during the quarantine.

“Lol who is this? Because it sure isn’t Dorit,” one follower remarked. “Who are you and what have you done with Dorit,” another follower asked.

However, not everyone hated Dorit’s new photos. Her RHOBH co-stars supported her, including Erika Jayne, Lisa Rinna, and Sutton Stracke. Many of Dorit’s fans also came to her defense. However, the model has yet to respond to the latest plastic surgery allegations.

Dorit Kemsley was the center of plastic surgery rumors before. The Real Housewives of Beverly Hills star previously responded to the claims that she got “a head transplant” during Part 2 of the Season 9 reunion. She’s used to be the subject of headlines, and during the reunion, she addressed viewer questions about plastic surgery.

“I’m very happy to say what I’ve had done,” Dorit explained, as per BravoTV.com. “Because I think it’s comical when people say that I’ve had a facelift and a bunch of surgeries. A little Botox and filler…that’s all I’ve ever done on my face.”

Dorit also credits makeup for her ever-changing looks. But some fans aren’t convinced that Botox and fillers are all she’s done.

What are your thoughts on the plastic surgery rumors involving Dorit Kemsley? Sound off below in the comments section.