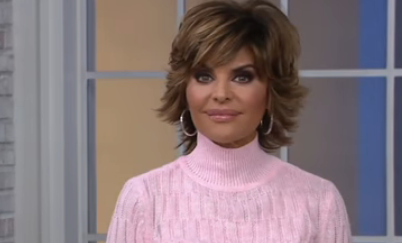 The Real Housewives of Beverly Hills star Lisa Rinna is fighting back against QVC Karens. The former soap star took to her Instagram Stories to vent about the shopping channel telling her essentially to stop talking about political issues.

RHOBH Star Claims She is Being ‘Muzzled’ by QVC After Complaints

In a now-deleted post to her Instagram Stories, Lisa rails against the mega shopping network for giving her an ultimatum to keep her job. In her post, Lisa writes that fans “bombarded” QVC with demands that they fire the RHOBH star. The fans also threatened to stop buying Lisa’s clothes on the shopping network.

What did Lisa do to prompt such outrage? That’s unclear. However, The Blast notes that Lisa has been outspoken about her support for LGBTQ rights. More recently, she’s shown her support for the Black Lives Matter movement.

Whatever got the “Karens” knickers in a bunch, Lisa can no longer talk about anything political. She wrote, “I am sad to report. It would now seem I can’t use my platform to inform or question or say how I feel politically.”

The post came after “the Karen’s [sic] have bombarded QVC begging them to fire me and saying they will no longer buy my clothes.”

Lisa further claims that she feels that she’s been “muzzled” by the network. She tells fans that she needs the job to support her family. However, she wants them to “use your voice and vote.”

The RHOBH star added a second post to her Instagram Stories, also now-deleted. In the second post, she wrote that she “will be on the right side of history.” Furthermore, she believes “in the end THAT IS WHAT MATTERS MOST.”

Instagram user @lovehousewives grabbed a screenshot of the first of Lisa’s two Instagram Stories. The posts were only up on Lisa’s social media for about an hour before they disappeared.

#LisaRinna threatened by #QVC Karen’s for voicing her opinion and showing support for #BLM. We Stan our queen 👑 more than ever. #RHOBH #realhousewives #realhousewivesofbeverlyhills #bravo

Earlier this week, Lisa randomly shared a photo of former RHOBH star and friend Eileen Davidson. Or was it random? Fans wondered if Lisa was taking sides in the then-ongoing feud between Eileen and Denise Richards.

As fans know, Denise is the center of the RHOBH drama this season. Eileen left the show after Season 7. However, she will appear in the show’s second half. The soap actress chimed in recently on how Denise was acting ‘weird’ at a movie premiere last year when the drama was unfolding on RHOBH. (The episodes viewers are seeing now filmed in late 2019.)

Denise responded to Eileen’s comments on social media. She explained that she was sick at the time. Denise had two hernias fixed a few days after the movie premiere.

Eileen later let fans know that the two friends hashed out the miscommunication and all was good between them.

Lisa’s Instagram photo of Eileen had a simple caption from Lisa: “Yes.” Fans flooded the comments with wishes that Eileen would return to RHOBH.

Fans can see Eileen later this season when The Real Housewives of Beverly Hills returns on July 8.