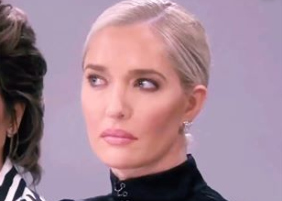 The Real Housewives of Beverly Hills fans find it frustrating that Bravo unexpectedly took the show off the air for a few weeks. The drama between Denise Richards and her co-stars was just heating up. The Wild Things actress recently let fans know the reason for the delay: coronavirus.

Denise’s take on the delay is that the stars didn’t get to finish their one-on-one interviews before production shut down. Andy Cohen also notes that the editors have to work separately from home, which takes longer than working together.

Whatever the reasons fans are not having it. The show won’t return until early July, but Bravo gave fans a taste of what’s to come with a next episode preview.

Where We Left Off Before Hiatus

When we left off the ladies of RHOBH, they were attempting to stop Denise and her hubby, Aaron Phypers, from walking out of Kyle Richards’ BBQ. The couple abandoned ship (er, picnic table?) after Kyle accused Denise of mom-shaming her.

In an earlier episode from Season 10, Denise was unhappy that her daughters overheard talks about threesomes. The BBQ Kyle hosted was family-friendly and she wondered why Denise didn’t bring her kids.

Denise implied that she didn’t want her kids around the women. When her RHOBH co-stars tried to call Denise out for the comment, Denise’s husband jumped to her defense.

He repeatedly butted into the conversation, which annoyed the other women. Teddi Mellencamp called him an “a**hole” in a later confessional. Denise eventually grabbed Aaron by the hand and practically dragged him out.

Fans then dragged Aaron for whispering to Denise that he was going to crush her hand. He was upset that she kept telling him not to say anything because they were on camera.

The episode left off with a “to be continued” as Aaron and Denise made their escape.

In her one-on-one interviews after the BBQ, RHOBH’s Erika Jayne expressed her frustration that Aaron kept putting his two cents into the conversation. In the next episode’s preview, Erika confronts Aaron about his unwanted behavior.

As the two exchange words, Aaron asks Erika if she “really” wants to go there. Erika snaps back that she can “go anywhere.” She then dares him to “Come see about me.”

In a later confessional, Erika quips, “We don’t need your opinion, Aaron, “ Us Weekly reports.

As fans know, much of Season 10 of RHOBH revolves around the allegations that Denise had an affair with RHOBH alum Brandi Glanville. Denise denies the claims. Before the season started, the other ladies said in several interviews that there were other issues with Denise before the affair allegations came out. Those issues are what viewers are now seeing playing out on screen.

Well, not now-now, since the show is on hiatus. The Real Housewives of Beverly Hills returns to Bravo on Wednesday, July 8. Watch the preview below.

#RHOBH returns in 2 WEEKS on @BravoTV! And it will be worth the wait 💎 Ice Queen returns….