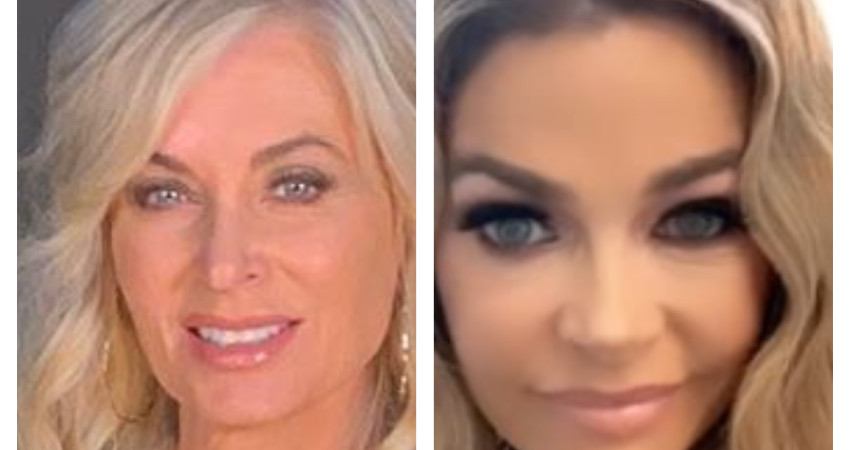 The Real Housewives of Beverly Hills alum Eileen Davidson accidentally waded into some drama this week. The iconic soap actress said she “had a feeling” something was going on with Denise Richards at a movie premiere last year.

The comments came ahead of Eileen’s upcoming appearances on Season 10 of RHOBH. The show is currently on break until early July and fans are finding drama where they can.

Eileen Davidson joined RHOBH for Season 5. Her time on the show was short, leaving after Season 7. She made guest appearances on Season 8. She will also be featured on some of the upcoming episodes of Season 10.

While Eileen hasn’t interacted with Denise on RHOBH much, the two know each other from their acting careers.

For that reason, Denise was one of the cast members to support Eileen at her husband’s movie premiere last year. Eileen appeared on Bravo’s The Daily Dish podcast earlier this week to chat. The topic of Denise’s tense Season 10 came up.

Former RHOBH star Brandi Glanville alleges that she had an affair with the very-married Denise Richards. Denise denies the claims, but viewers are also seeing other drama she has with her co-stars.

During the podcast, Eileen recounts feeling that “something was going on” with Denise at the movie premiere. She said,

“But it did feel a little weird, and I asked Denise, ‘Are you OK?’ because it just felt weird, and she was like, ‘Yeah, I’m fine.’ Something was going on.”

Eileen also reveals that Erika Jayne and Lisa Rinna told her about the BBQ drama. She says that they thought Denise was being a “hypocrite,” Us Weekly reports.

News of Eileen’s podcast appearance made its way to Denise. She spoke out on Twitter to clarify why things were “weird” at the movie premiere.

In a tweet tagged with Eileen’s Twitter handle, Denise explains what was going on at the premiere. She wrote, “I was so nervous knowing I was having surgery in two days. I was so sick & in so much pain but we still wanted to be there.& I hadn’t told any of other women about it.”

In December of 2019, Denise shocked RHOBH fans with a photo of a severely bruised tummy. It turns out that the surgery Denise is referring to in her tweet was to fix two hernias in her stomach.

At the time, Lisa Rinna called Denise out for missing the Season 10 wrap party, prompting Denise to reveal the surgery. Former RHOBH star Camille Grammer defended Denise by asking Lisa Rinna why she didn’t just pick up the phone and call Denise directly.

It seems fitting, then, that that’s exactly what Eileen and Denise did to hash out the tweets.

RHOBH’s Denise and Eileen Chat on Phone to Resolve Drama

On the evening of June 23, Eileen informed her followers that the actresses worked the situation out. She wrote that she “texted Denise” as soon as she saw Denise’s tweet calling her out. In response to the text, Eileen reveals that Denise immediately called her.

According to Eileen, both ladies assured the other that they “meant nothing” by their comments or tweets. In fact, Eileen says she “likes Denise very much.” She considers her friend a “cool chick.”

When I saw this tweet this morning I immediately texted Denise and told her I meant nothing negative or provocative by the comments I made. She called me right away and told me she meant nothing by the tweet she sent. I like Denise very much. I think she’s a very cool chick. https://t.co/7BPeFuU1KW

While the drama is averted for now, it will likely ramp up once the Brandi/Denise situation begins playing out on our screens. The Real Housewives of Beverly Hills returns to Bravo on Wednesday, July 8, 2020.