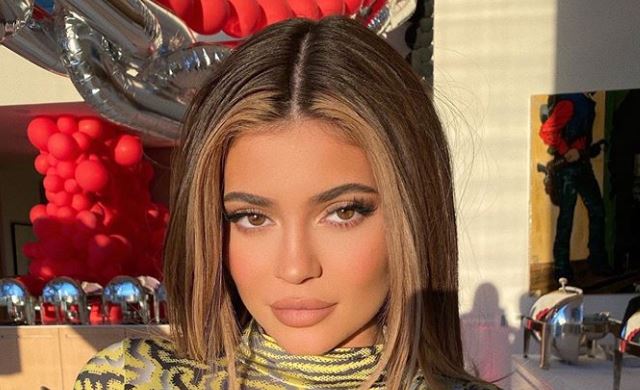 Kylie Jenner wrote, “Happy Father’s Day” on her Instagram post dedicated to her baby daddy Travis Scott. Because, it was Father’s Day on Sunday, Stormi Webster got to spend time with her dad. Jenner posted a series of pictures of Scott with daughter Stormi. Moreover, they are posing in front of a blue flower arrangement with the word “Daddy” spelled out in roses. Lastly, the proud father has his arms around his daughter while she stuck her tongue out for the camera.

The parents to sweet little Stormi have recently ignited rumors of reuniting. The two of them have been together without their daughter at The Nice Guy Bar and Restaurant recently. Kylie Jenner and Travis exited separately, but they got in the same black SUV before hitting the road. However, this was after the quarantine was lifted in Los Angeles.

Two Years Of Dating And One Child Together

Kylie Jenner and the rapper dated for two years and ended things in October 2019 according to In Touch sources. Kylie confirmed the split via Twitter saying, “Travis and I are on great terms and our main focus right now is Stormi,” she wrote at the time. “Our friendship and our daughter is priority.” Although the romantic relationship was over they were out spending time with Stormi as a family.

Apparently, in February rumors started that Kylie Jenner and Travis Scott were, “in the process of getting back together.” However, they were going to take things slow and work on their differences for Stormi’s sake. They didn’t want to get back together and then split again and hurt Stormi in the process.

While the two may encounter ups and downs, their relationship “really isn’t that complicated,” a source exclusively told In Touch in March. They simply “evolved into something else,” the insider added. “They love each other, and they love their little girl. It works for them, and, at the end of the day, that’s all that matters.”

Kylie Jenner was 19 when she hit it off with Travis Scott at Coachella in 2017. Kylie had just broken up with Tyga when she met Scott. Travis performed at Coachella and Jenner spent the evening with him. When the rap star had to go back on tour the Keeping Up With The Kardashians reality star decided to go with him when he asked.

In February 2018 Kylie Jenner announced the birth of Stormi Webster. Kylie kept her fans guessing throughout her pregnancy. She never confirmed whether or not she was pregnant and kept out of the public eye. Jenner later said she did not reveal to the world that she was expecting because she wanted to “prepare for the role of a lifetime” in a “positive, healthy and stress-free way.”

Kylie and Travis continue to do a good job at co-parenting Stormi, maybe they will work things out in their relationship and reignite their romance as well. What do you think?

Lisa Rinna Stars In New ‘Days Of Our Lives: Beyond Salem’ For Peacock
‘B&B’ Spoilers: Eric Forrester Does The Unthinkable – Proves He Is DONE!
Did Lala Kent Throw Shade At Scheana Shay’s Appearance?!
‘LPBW’ Tough Jackson Roloff Shows Dad What He Is Made Of
Tammy Slaton Celebrates Birthday: How Old Is She, Anyway?