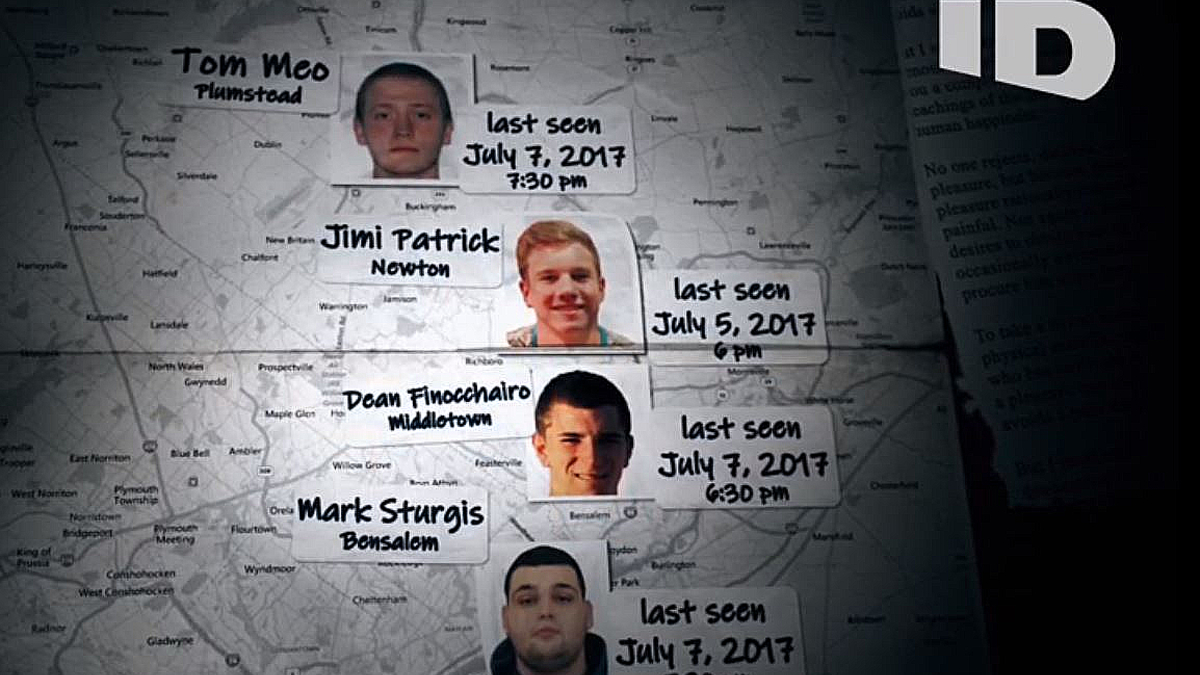 The Lost Boys of Bucks County is about the disappearance and murder of four young men in Bucks County, Pennsylvania. Their deaths received headlines and spurred a deep investigation into this unusual and tragic circumstance.

Investigation Discovery has produced a compelling two hour special that explores every aspect of this troubling case.

TV Shows Ace true crime fans and Investigation Discovery have been tracking the murder of the four men who went missing in Bucks County.

The young men disappeared within days of each other, and after days of searching, officials began putting the pieces together of the puzzle of what led to their deaths.

About the Lost Boys special

ID is bringing a well produced timeline of events and deep dive into the victims and how their murders happened on The Lost Boys of Bucks County.

In a gripping two-hour special, this special unravels the frightening serial murders that shook an idyllic, sleepy suburb of Philadelphia to its core.

When it began was the summer of 2017. The nightmare started on July 5, 2017 when 19-year-old Jimi Patrick of Newtown Township went missing.

Within two days, three other young men in nearby communities – Dean Finocchiaro (19), Tom Meo (21), and Mark Sturgis (22) – all disappeared without a trace.

In true crime fashion, the leader in this genre, Investigation Discovery (ID)  exposes the gut wrenching investigation which perplexed and stymied the local law enforcement and it speaks to the grieving families who are left in the wake of a shocking and unexpected tragedy.

The timeline of Lost Boys

Over the course of two days in July 2017, panic gripped the Bucks County, PA. community as several young men went missing without a trace.

The FBI was called in as families become increasingly more desperate for answers. Together with the local police, they tried to piece together a seemingly random puzzle that crosses various jurisdictions.

It took a few days, and the careful sifting through clues, but together they find a person of interest with connections to the missing boys – Cosmo Dinardo. Later evidence showed Cosmo DiNardo’s history of extreme mental illness and his family’s efforts to get him treatment for bipolar disorder, schizoaffective disorder, and schizophrenia.

Of this find, ID says:

Under interrogation, the 20-year-old claims no involvement in their disappearances, but when evidence suggests that there is more to his story, a massive search effort ensues on the Dinardo’s sprawling property. When additional evidence is unearthed, Dinardo has no choice but to confess to a crime so heinous, it shocks multiple it unveils a brazen predator and his accomplice, Sean Kratz, whose heartless actions carved a path of destruction through the otherwise peaceful region.

The creatives behind the Lost Boys special