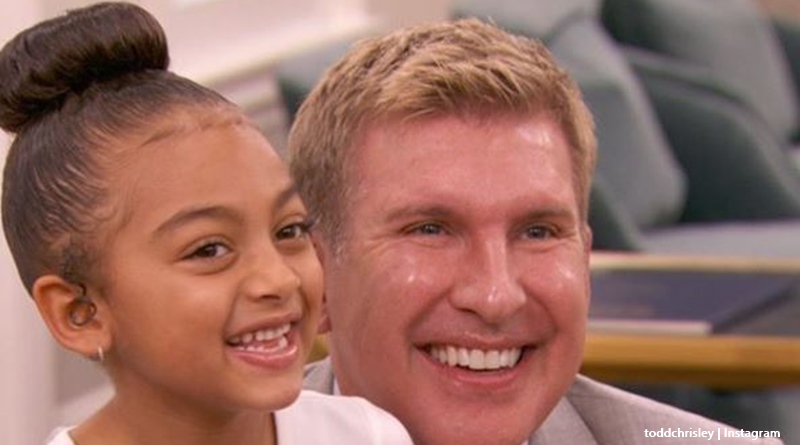 Chloe Chrisley, raised by Julie and Todd Chrisley, is smart and funny. Her biological parents, Angela Victoria Johnson and Kyle Chrisley, came around to it as the best thing. Born on November 10, 2012, she enjoys a fun family life.

Actually, fans love watching her grow on Chrisley Knows Best. The cute little girl loves riding horses, and also follows Todd’s ways when it comes to teasing and pranking, it seems. Now, she turned the tables on Todd on Father’s Day. Amused, Todd shared a video about it.

Todd took to Instagram on Father’s Day and shared a video of himself racing Chloe across the pool. Quickly, Todd took off and swam, but Chloe ran around the pool and jumped into the water just before Todd got there.

Many fans commented on Chloe. Here’s whats some of them said to Todd Chrisley:

Always getting one over on me …

The Chrisleys raise Chloe and she’s clearly an adored member of the family. However, every now and then trolls hit on Chloe because of her skin color. Unbelievably, that sort of thing still goes on. Rightfully, Todd slaps back smartly and swiftly when that happens.

In early June, Todd told his fans that he featured Chloe on his podcast. Back then, he shared a photo of himself with his adopted daughter. In his announcement, he said, “Silent Racism, I Love How God Made Me, and It’s Enough. Today I am joined by surprise guest Chloe for a conversation about race and racism in America.”

Unf0rtunately, a troll slammed at Todd, saying, “I’m sorry, I don’t like it. Marry your own color. It really screws up the kids.” Actually, Chloe hardly looks very “screwed up,” as Chrisley Knows Best fans know. Plus, a child shouldn’t ever be the target of trolls.

Todd slapped back very smartly. Scathingly, he told the troll that he hopes “the Lord lets [them] live long enough to see that color doesn’t screw kids up.” Todd noted that “haters” and “ignorance” are far more likely to screw up kids.

Clearly, Chloe looks like a well-adjusted, very well-loved, and clever little girl. Do you agree? Sound off in the comments below.