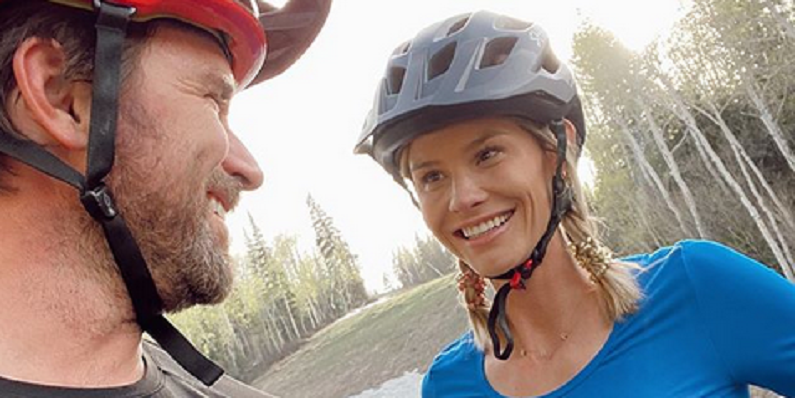 Meghan King Edmonds is opening up about her new boyfriend. The Real Housewives of Orange County alum is dating entrepreneur Christian Schauf. She previously revealed that she was focused on herself. Meghan even said that she removed the dating apps from her phone.

But she must’ve downloaded those apps shortly after. Because the former reality star met her new boyfriend on a dating app. Meghan has made every effort to move on from her ex-husband Jim Edmonds. She even dropped “Edmonds” from her last name. The podcast host got real about her relationship on her blog.

Per Us Weekly, Meghan King Edmonds took to her blog on Wednesday, June 17 to talk about her relationship. She started dating Christian Schauf a few months ago. The 35-year-old revealed how the two met. Meghan manifested her dream man before he entered her life.

“When I knew I had worked through my pain to the point where it wouldn’t define me or scar me but instead teach me, I knew I was ready to really date,” Meghan wrote in a recent blog post. “I shot for the stars and made a list of every last minute detail of the man I was looking for – my list was pages long – and daily I’d ask God to open my heart to the possibility of loving again.”

While swiping on a dating app, Meghan met Christian. The couple “did the whole ‘quarantine dating’ thing with lots of FaceTiming.” But she thought it was just going to be a casual thing. After some vetting and two COVID-19 tests, the couple met at the airport while wearing masks.

Hayes and Hart are TWO! Hayes is compassionate, curious, shy, loves playing rough and carries a bat wherever he goes. Hart is resilient, outgoing, courageous, the biggest mama’s boy ever, and takes no smack from nobody. These bundles of joy magically turned into toddlers 💫 Maybe now I can actually savor the moments a little bit instead of just trying to survive them 😜 Here’s to TWO being TWO, Happy birthday, boys! 🎂 🎂

“It wasn’t until weeks into our dating relationship when we finally went to a coffee shop, got a drink at a bar, and ordered a meal at a restaurant – this order felt a little backwards and old-fashioned to us but it also made us feel more deeply connected.”

Meghan revealed that Christian wasn’t her boyfriend back in May when reports claimed that they are dating. However, it caused them to talk about their relationship. That’s when the couple decided to make it official. Meghan added that she’s “up to [her] eyeballs in happiness.” The Unchartered Supply Co. CEO is “someone I truly cherish.”

The former Bravo celebrity gave fans a glimpse at Christian’s birthday celebration, per BravoTV.com. Her boyfriend turned the big 4-0 earlier this week. To celebrate his special day, Meghan shared several photos of themselves on Instagram.

“Here’s to living your best life every second…because life is not a dress rehearsal,” Meghan captioned the post. “Happy 40th birthday @christianschauf. May the road rise up to meet you. May the wind always be at your back.”

On Saturday, June 13, Meghan called Christian’s birthday as an “epic night.” She also revealed that her hair is the best that it’s ever looked. She also drove 30 miles to get Dairy Queen’s signature ice cream cake.

Meghan and Christian made their relationship public less than a month ago. However, the couple has been together for a few months. She’s currently staying with Christian in Utah, while her three children stay with Jim Edmonds in St. Louis.

What are your thoughts on Meghan King Edmonds and Christian Schauf? Sound off below in the comments section.