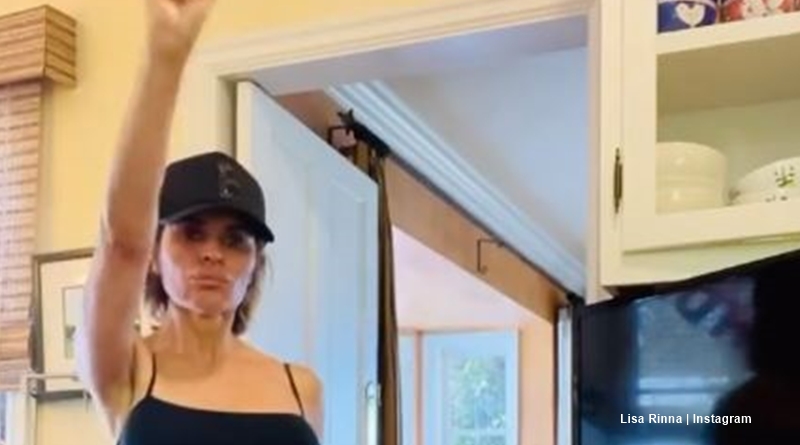 Lisa Rinna took to Instagram to promote Christian Cowan X Le Specs sunglasses. And that’s all she wore. The series of photos sans any other clothing sent fans rocking. And they commented on her daughter Delilah’s reaction to the photos as well. Meanwhile, Real Housewives of Beverly Hills cast members Kyle Richards and Andy Cohen seemed very taken with the photos.

RHOBH star Lisa sometimes shares photos of her on magazine covers. In fact, at one time, she shaded Denise Richards for sharing inappropriate magazine covers. At the time, we noted Lisa Rinna “commented on a post, “And [Denise] is worried about her kids sitting next to us at dinner?”‘ Well, the latest pics that Lisa shared might add to Denise not wanting to do that. The photos Lisa shared show her with nothing on at all. Well unless eyewear is classified as clothing.

The Real Housewives of Beverly Hills veteran also shocked her own daughters a bit. It seemed the photoshoot came as a surprise to them. Delilah Belle wrote in the comments, ” Mom when tf did you do this?” Plenty of fans reacted to Delilah. One said, “please don’t let your Mom do this again. She is way too old to be an advertisement for anorexia.” But other RHOBH fans loved the photo. One said, “coolest mom be very proud of her she’s amazing with all she does!! ”

Bravo host, Andy Cohen also commented on the photos. He noted, “I’ll have what you’re having…”  One very happy fan agreed with Andy, writing, “for sure!! She is stunning! 👏🙌🏾. Love you Andy.” Kyle Richard also commented, and People picked up what she suggested. They cited her as saying, “OH MY GAWD…Please wear this to the Reunion.”‘ Other suitably impressed cast members included Dorit Kemsley and Erika Girardi.

Certainly, the photo shoot went down well with Lisa Rinna’s husband, Harry Hamlin. he wrote, “THAT’S MY GIRL!!! ❤️❤️.”  And, Christian Cowan noted, “Why wear anything when you look this good?” Then, in one of the photos that showed the RHOBH star sitting on the floor, Chrissy Teigen popped up in the comments. She wrote, “honored u chose me to style wardrobe !!” One of Chrissy’s fans loved the comment and declared her the “Thursday” comment winner.

Photos of Lisa certainly woke up lots of people on Thursday

Between the three sets of photos of Lisa posted up, about 6k people commented. Over 100k people loved the photos. Most people loved the amazing photos, but of course, a few trolls got in comments about being way too skinny. Some of them slammed her because they feel she promotes anorexia. One thing for certain though, the RHOBH star got a lot of attention wearing only sunglasses.

What do you think of the photos that Lisa Rinna shared? Sound for your thoughts in the comments below.